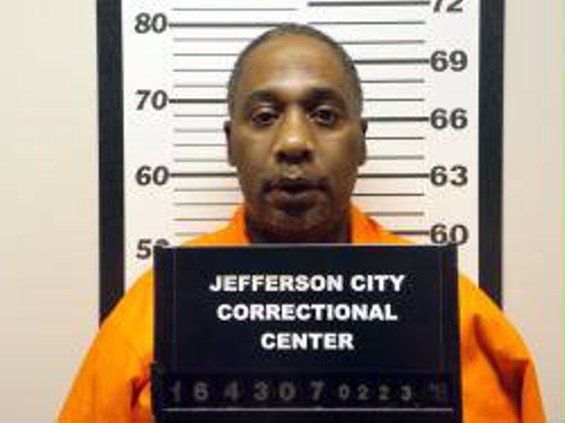 When the Missouri Supreme Court cancelled the May 12 execution date for Kimber Edwards, the reason seemed pretty mundane -- Edwards' two attorneys would be tied up around then and unable to properly represent him.

However, the St. Louis Post-Dispatch just published a stunning interview with Edwards' supposed accomplice, Orthell Wilson. In it, Wilson recants his implication of Edwards in the 2000 murder of Kimberly Cantrell, Edwards' ex-wife.

"Did he pay you to kill his wife?" asked reporter Jeremy Kohler in a telephone conversation recorded from the Jefferson City Correctional Center.

"No, he did not," Wilson answered.

Missouri Department of Corrections
Kimber Edwards has been on death row since his conviction.

A family member found Cantrell dead in her University City apartment in 2000 with two bullet wounds to the head. Witnesses said they saw Wilson at her door just prior to her death. When police confronted Wilson, he said his landlord, Edwards, asked him to go to Cantrell's apartment to "scare" or "intimidate" her, but then said the real motive was murder. According to court documents, his story changed several times. Sometimes his fee was a couple hundred dollars. Ultimately, he settled on $3,500.

Even though Edwards -- who remarried and had more children -- initially denied any involvement, he eventually confessed to paying Wilson. Later, he said those confessions had been coerced, and that he just said what detectives wanted so they would leave his family alone.

"It was my doing. It was my choice and I did that, and that was wrong, simple as that," Wilson told the P-D.

Wilson was aware that Edwards' execution date was approaching but said no one had asked him whether his initial confession was true. He told the P-D he felt no obligation to raise the alarm on his own.

"No one ever contacted me about this until now," Wilson said. "I figured that once I did what I did and I got my punishment, I'm just going to come in and serve my punishment and leave it at that."

As far as motive, Wilson was a bit fuzzy on the details, including what exactly he told police at the time. He said he was at Cantrell's apartment simply to rob her.

"I had habits, you understand what I'm saying?"

Daily RFT reached out to both of Edwards' attorneys and will update as we learn more.