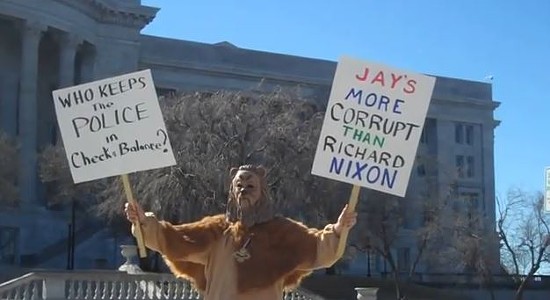 via Youtube
Jefferson City isn't that far from Kansas, actually.

Remember that story about Scott Davis, that guy who was was tripping so hard, he got butt-naked, beat-up people -- including a cop -- and got 25 years in prison? Well, a man in a "cowardly lion" suit stood in front of the state capitol on Saturday to protest alleged police corruption in the O'Fallon Police Department that Davis' family says caused the long sentence.

"Governor Nixon awarded the medal of valor to an O'Fallon police officer based on lies," the man said in a video sent to Daily RFT.

The "lies" the man was referring to is based on the 2012 incident that saw then 23-year-old Davis get ridiculously high on LSD and brutally attacked his friend, Catherine Naber. The initial attack is not up for dispute. However, Scott's family -- and Naber herself -- have been arguing for months that the police officer called to the scene lied about saving Naber once he got there, something for which he was awarded a Medal of Valor by the governor.

In case you're not aware of the story, here's some background: Back in April 2012, Davis was recuperating after having spent a few weeks in a mental hospital for doing so much LSD in one trip that doctors said he was under a "permanent drug-induced psychosis," his mother, Gail Daniels, tells Daily RFT. But then Scott did the worst possible thing one can do after having gone on a perma-trip: He took more LSD.

Naturally, once the chemicals had their effect on Davis' already ravaged mind, he thought evil spirits were running around the house and his longtime friend Naber had murdered his cousin and was conspiring to kill him, too. So he proceeded to beat her with an imitation "medieval-style club."

She escaped the house and locked herself up in her car, where she called 911. It's at this point where the stories differ.

For more on this story about what not to do on LSD, click on the next page...