Turpentine-Drinking Homeless St. Louis Millionaire Missing, Might be in Maplewood 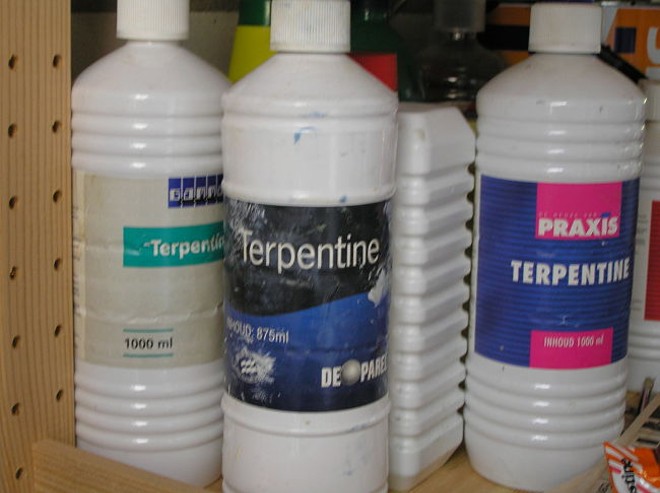 VIA LYMANTRIA
This should go without saying, but you probably shouldn't drink turpentine, millionaire or not.

In what is assuredly one of the strangest series of words strung together into a sentence within a news article this week, a homeless millionaire with a St. Louis Fire Department pension and a penchant for drinking turpentine has gone missing, prompting a St. Louis city alderman to stand at the intersection of Manchester and Hanley and yell at a bridge.

The utterly baffling story comes via KMOX's Kevin Killeen, a masterful reporter of the surreal in St. Louis. According to KMOX's report, St. Louis City Alderman Joe Vaccaro is friends with the man in question, one Gary Schaefer, who previously lived on Tholozan Avenue in south St. Louis.

Vaccaro says that, years ago, Schaefer's dying mother asked him to keep an eye out for her son. Vaccaro subsequently set up a bank account in Schaefer's name that contains about a million dollars of the Schaefer family's money. According to Vaccaro, only Schaefer is able to access that account.

In addition to that considerable chunk of cash, Schaefer also has a pension from his time working with the St. Louis Fire Department, where his job, according to KMOX, involved "driving the chief around."

When asked why a man with such wealth would find himself homeless, Vaccaro tells KMOX simply that "some people don't like rules."

One thing Schaefer does like, though, apparently, is drinking turpentine.

In describing the man to KMOX, Vaccaro notes that Schaefer tends to have an odd smell to him, because, "He likes to drink a spot of turpentine for his health." Which sounds ridiculous, and is ridiculous, but is also actually a more widely held notion than one might think, with even actress and comedian Tiffany Haddish apparently on board. (Note: Please don't drink turpentine — medicine doesn't come from the hardware store.)

In addition to the odor, Schaefer is further described as thin, white and about six feet tall, with gray hair and a beard. He reportedly frequently rides a bicycle, which has been spray-painted.

Vaccaro says it's been years since he spoke with Schaefer. But recently he's been holding hearings related to homelessness in the city, and that got him thinking about his old friend, and the promise he'd made his mother.

"He had my phone number and should have called me if something happened," Vaccaro tells KMOX.

Vaccaro seems to believe that Schaefer might be living somewhere in the Maplewood area, which is what brought the alderman to the bluffs at the intersection of Manchester and Hanley, where he yelled "Hey Gary" for a while at a creek while KMOX recorded.

Maplewood police tell KMOX that the description of Schaefer sounds familiar, and they are asking that residents who spot a man who looks (or smells) like him to contact the department.

Here's hoping for a happy ending to one of the more bizarre stories we've seen in some time.