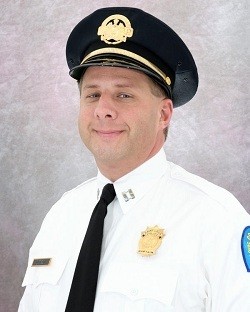 Given the divisive politics of this town, Daily RFT was expecting fireworks over the weekend with the hiring of Sam Dotson as the next St. Louis police chief.

The police board announced on Friday afternoon -- a time savvy newsmakers know is best for burying controversial news -- that it had unanimously chosen Dotson. Prior to being tapped top cop, Dotson has worked as Mayor Francis Slay's director of operations for the past two years during which time city hall successfully regained local control of the police department despite objections from rank-and-file officers. You'd think there'd be some controversy over that, no?

Or how about the simple fact that another white police chief will oversee a city that is predominately black? Surely there'd be some social media sniping about that, right?

We haven't seen it.

In fact, it's been strangely quiet on Twitter. Board of Aldermen President Lewis Reed -- who's waging a passionate battle for the mayor's office against Slay -- has yet to comment about the hiring on his Twitter feed. Same goes for Alderman Antonio French (Ward 21) who rarely misses an opportunity to call out the powers-that-be at city hall.

For that matter, Slay himself has not commented specifically about Dotson's hiring on either his blog or his Twitter account. On Friday he gave his endorsement to all the candidates for the job.

In fact, the only tweet about Dotson we found from an elected official came from Circuit Attorney Jennifer Joyce.

So it's safe to assume everyone is just okay with Dobson's hiring? Perhaps, or maybe it was simply that news of his hiring came as St. Louis and the nation was trying to make sense of another mass shooting -- this one at an elementary school that killed 20 kids and six adults -- to bother themselves with petty politics.