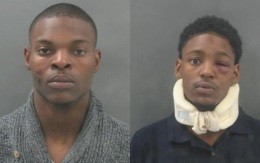 Leland Hughes (left) and Shawn T. Borders (right)
Two 21-year-olds have been charged in the robbery/rape incident that occurred Wednesday night on the southern edge of Gravois Park.

Leland Hughes of the 2600 block of Belt Avenue (in Wells-Goodfellow) now faces no fewer than 26 counts -- most of them felonies -- including buglary, robbery, kidnapping, forcible rape and armed criminal action.

His co-defendant, Shawn T. Borders of the 5100 block of Page Boulevard (in the Academy neighborhood), faces most of the same charges, minus the rape, plus armed carjacking.

Here's what happened, according to court records:


The pair showed up outside an apartment on the 3100 block of Chippewa at around 9:15 on the night before Thanksgiving. The renter -- described as a 31-year-old black male -- was at home, along with another black male, 42, and a black female, 18.

When the renter opened the door, Leland and Hughes allegedly forced their way in.
Hughes brandished a gun and the pair told them to get down on the ground, which they all did.

The robbers took three cell phones, a playsation, a flat-screen television, a computer, a printer, shoes, two tattoo machines (worth more than $500) and $800 in cash.

At one point, Hughes "dragged" the teenage girl into a different room, raped her both with his fingers and with his penis, according to the probable-cause statement.

Soon, the cops started looking for the pair, and it so happened that Hughes' mother called in a complaint that her son had taken her 2012 Volkswagen Passat without her consent.

At about 10:30 on Friday night, a couple of officers spotted the vehicle at Union Boulevard and St. Louis Avenue. They tried to pull it over, but it fled "at high speeds, running red lights." Turns out Hughes was driving. He crashed into another car at 5700 Natural Bridge Avenue, and he and Borders tried to run off but were caught.

(There were three other black males in the car, but no charges have been filed against them.)