Two Dead in South City: After a Fatal Ambush, a Police Shooting and Fight for a Baby's Future 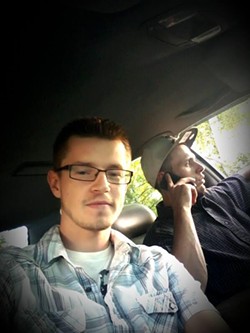 Upset that he was rarely allowed to see his son, James sued Roberts on June 3, seeking partial custody.

Four days later, he and Hajdarevic were cruising with another friend in the Cadillac. As they headed over to meet James' younger brother, Julian, near a Christy Boulevard shopping complex, someone opened fire on them. They heard three shots as they drove across the parking lot near Big Lots, turned left and saw a gunman fire two more.

One bullet burst into the side of the Caddy, lodging about eighteen inches below the driver's side window. The side airbag popped open, and James sped off.

Julian was just pulling up as the gunfire began. He saw the shooter hop into a blue SUV and take off.

The two brothers and their friends escaped uninjured. They reconvened on Ridgewood, a block from the Cobbs' house, and called 911. When police arrived, they examined the bullet hole in the Cadillac and then searched the parking lot, where they found two shell casings.

The shooter was long gone. Neither the Cobb brothers nor their friends could give investigators much of a description. Julian says they suspected Hernandez, but they weren't sure.

"We didn't actually know what he looked like," he recalls.

A few weeks later, James called his younger brother. By now, he was certain.

"You know who that was?" James asked, according to Julian. "That was Rey who shot at me."

Police won't reveal whether Hernandez, nineteen, was ever a suspect, but in an email, a spokeswoman says detectives learned about the custody battle between James and Roberts during their investigation into the near-miss shooting. There have been no arrests in the attack; police say the victims weren't forthcoming.

Of course, two of the victims are now dead. The case was downgraded to "inactive" after James and Hajdarevic were killed less than five months after the initial incident. The spokeswoman says that "if anyone is able to provide new information relative to the incident, investigators would still like to determine who is responsible and hold them accountable."

In a cast full of tragic figures, Haris Hajdarevic stands out.

The 22-year-old novice truck driver was born in Germany after his family fled the civil war in Bosnia, eventually immigrating to St. Louis in the late 1990s. Slim, with an easy way about him, he was a curious kid who taught himself how to build and repair computers.

Anela Brakic grew up across the street from his family's home near Morgan Ford Road and Neosho Street, and their lives were intertwined in all sorts of ways. Hajdarevic dated her sister for a time. Brakic dated one of his closest friends.

"He was like a brother to me, honestly," she tells the RFT one afternoon.

They had been classmates at Oak Hill Elementary and Long Middle School before going to different high schools. Hajdarevic looked out for her even after they'd grown up. Brakic remembers when she started working at her mother's business, the now-closed Elmedinas Coffee Bar off Kingshighway, and had to open at 6 a.m.

"He would stay up all night and come down with me just to make sure I had someone there when I went down there," she says.

James would sometimes join him in the afternoons at the bar. Neither was a big drinker – they might have a beer each, Brakic says – but they liked music and would play around with the DJ equipment. Hajdarevic called himself DJ Smash and played a mix of Bosnian and American tunes. Like James, he loved to cruise the neighborhood with the stereo pounding. Peggy always knew they were close when she heard the thump of the bass.

On the night of October 28, the two friends dropped by the house on Taft for a few minutes. Peggy was at work, and Julian was out, leaving only Jamie at home.

James ran in and wolfed down a late dinner of fried chicken. He didn't stay long because Hajdarevic was waiting for him outside in the car. Shortly after 10:30 p.m., James, done with his dinner, slid back into the passenger seat.

The shooting began seconds after they steered away from the curb. Jamie remembers bolting out of the house and looking up Taft toward the sound. Hajdarevic's sedan had careened into a parked car about four houses away.

The worried father hurried into the street and pulled open the car door. There in front of him was his 23-year-old son, eyes wide open, already dead.

"James!" he called, taking his boy's head in his hands. "James!"

Hajdarevic murmured softly, but Jamie couldn't make out the words. By the time help arrived, his son's friend was dead too.

Jamie still sees the night in his head, rewinding from the gory discovery in the street to his son's final meal in the house where they both grew up. A plate of chicken, and then out of the door forever.

"His belly was full," Jamie says finally, and it's as if that one fact gives him some small measure of peace.