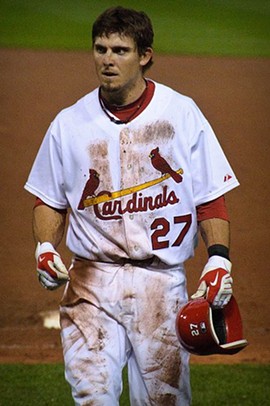 commons.wikimedia.org
You'd think with a uniform that dirty Greene would be able to grit his way into a starting job around here.
If someone asked you to sum up the Cardinals' 2010 season for them in the quickest way possible, you would need look no further than the way the Cards played the last two days against the first-place Padres versus the way they played against the far-out-of-contention Cubs.
The Cubs started Jeff Samardzija, the former football star whose career major league ERA is 5.43, and the Cardinals couldn't push across a run to save their collective life. The Padres started Mat Latos, who came into the game with the lowest opponent's batting average in the majors (and had put himself solidly on the short list for the Cy Young Award), and the Cardinals put nine hits and eight runs on him before making their fifth out of the evening. It just doesn't make any sense. At all.
You know what else doesn't make sense? Taking Tyler Greene out of a five-run game in the middle innings to sub in the worst player in baseball. But hey, that's what we got.
Greene started the game at third base last night, and had a pretty good go of it. He was walked intentionally, doubled home a run, and walloped a ball to center field that unfortunately found the glove of Will Venable. He hit the ball well, he looked pretty decent at third base. Tyler Greene had a fine night.
Of course, having a good night didn't mean a damned thing when it came time for Tony La Russa to make one of his now-nightly Inexplicable Substitutions and replace Greene before the top of the fifth inning with Pedro Feliz.
The best thing about this, in my ever so humble opinion, is that there was just a piece about Greene being the best option for the Cards right now on their official website which was published last night. In it, Tony La Russa says some very nice things about Tyler, including saying he doesn't want any rough moments at the hot corner to reflect badly on Greene, since he isn't really a third baseman by trade. It was, in all honestly, a remarkably sane and measured thing to hear from this particular manager. Kind of nice, actually.
So what does La Russa do after calling Tyler their best option at third and praising his athleticism and energy? Takes him out in the middle of a game for absolutely no reason I can divine. If Greene were hurt, that would be one thing, but there appears to be no physical issue for him.
This wasn't the late innings of a close game, when you have to worry about a player manning an unfamiliar position making a mistake which could cost you the game. This was a five-run lead in the fifth inning. If ever there was a moment to let a kid play and gather more info on what you might be able to expect out of him in the future, last night's game was most definitely it. Sure, Tyler may not be a third baseman, but wouldn't you like to see if he can play there at least passably so you might not need to go sign Aaron Miles to be a utility player again next year?
The only reason I can even kind of wrap my head around is that La Russa chose that game precisely because it was a low-stress situation to try and give Feliz a chance to get back on track. If that's the reason, though, it's still a terrible idea. Pedro Feliz is not a part of this team's future. We don't care if he gets on track, unless his getting on track somehow helps this team climb back into the division race. Seeing as how I doubt seriously Pedro Feliz on his best day is somehow capable of carrying a team to a ten- or eleven-game winning streak, his poor play should be dealt with by just telling him to sit over there on the bench until we need you to catch a grounder in the eighth inning.
This is exactly the time of year the Cardinals should be auditioning players for the future, to get an idea what they might have for next season and beyond. Sure, you still try to win the games, but if you get a chance to take a look at a kid without compromising your chances at a victory, you take it. Unless Tyler is hurt and we haven't heard yet, there was absolutely no reason to choose handing Feliz four innings of playing time that benefits no one over giving Greene the plate appearances and chances in the field he so badly needs at the major league level.
Sure, it was a small move, one barely even worth mentioning. But just because it was small doesn't mean it wasn't completely inexplicable and just one more example of a decision made by Tony La Russa that makes me question just what he's thinking some nights.
I'm not bashing La Russa, or even bashing this decision. (Well, okay, maybe a little.) I just don't understand what possible gain there is in so many of the decisions we see on the field these days, and I wish I did.