Unreal talks bridezillas, speeds off on a Spyder and offers a heroic (if we do say so ourself) giveaway

Unreal likes to fancy ourself something of a badass. (It comes with the territory of prank phone calls and racehorse ownership.) But lately, we must confess, we have grown a little sedate, devoting more of our time to home-improvement projects (like bidet installation) and burnishing our nerd credentials (like taking the Mensa test). It's summertime, and as we write this, we hear a motorcycle roaring its way down Delmar Boulevard, on its way to a more open road. We sigh. And then the phone rings....

It's Rich Gonnello, an account executive from Taylor PR in New York. He's downstairs. He happens to have three Can-Am Spyder roadsters with him. Would we care to adjourn to the parking lot to take one for a spin?

Now, we must admit, as far as motorcycles go, the Spyder is not particularly badass. For one thing, it's, well, it's a tricycle: two wheels in front, one in back. Technically, it's possible to make it pop a wheelie, but it would be difficult. Still, it's bright red, has a motor and makes a satisfying vroom when you open the throttle. That's fine with us, as we've never actually ridden a motorcycle before, and real ones probably don't come with training wheels.

Tentatively, we climb astride the Spyder.

"Don't worry," says Paul Wharton, a salesman at West County Powersports, one of two St. Louis-area outlets that sell the Spyder. "I taught three girls how to ride a motorcycle, and two of them are still racing professionally." 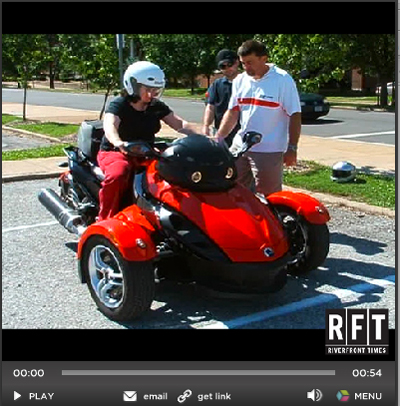 We stall out a couple of times, but soon we are whizzing around the University City municipal parking lot at the astonishing speed of ten miles per hour. We gun the engine. Holy shit! We're up to nineteen!

We ask Wharton to demonstrate how the Spyder can burn rubber, and he cheerfully obliges. Just as he zooms back, a bald man in an orange safety vest rides over on his bicycle to check out the Spyders. He circles, but doesn't stop. Then he raises his middle finger and declares, "Fuck you and your racer, asshole!"

Gonnello and the two Pauls stare at one another. "He wasn't serious," Gonnello says. "Was he?" 

Fixer-Upper
Many years ago, when Unreal was a young hoodlum, we would prowl the streets at night armed with a bottle of Wite-Out, a Sharpie and a copy of Fowler's Modern English Usage on a mission to make our world a more grammatically perfect place. Even at the time, we knew we were fighting a losing battle, and as we grew fat and bourgeois, we gave it up.

But now, as our beloved state of Missouri faces a grammar crisis of serious magnitude, it's once more unto the breach for Unreal. The menace:

The new license plate and its motto: "Show Me State." As any literate schmo could tell you, because this usage employs "show" and "me" together as a compound modifier of "state," they need to be linked by a hyphen in order to avert ambiguity: "Show-Me State."

This matter came to public attention a few weeks ago, when an Oklahoman (an Oklahoman, for God's sake!) complained to the Joplin Globe. By then, 12 million of the new plates had been printed.

Why, you ask, didn't Unreal raise a ruckus back in April when Omar Davis, director of the Missouri Department of Revenue, unveiled the new plate? Well, we had other things on our mind, like the fate of Ballpark Village. And Mensa. Plus, the sun was in our eyes.

But fear not! Besides being a dyed-in-the-wool adherent to correct use of the compound modifier, Unreal possesses a civic-minded streak (see?) a mile wide. And thus we offer, entirely free of charge:

Each kit contains three hyphens crafted from the finest electrical tape: one for the front, one for the back and a spare in case one of the others gets stolen. Just send a stamped, self-addressed envelope to:

(No salesman will call! Offer good while supplies last.) 

'Zilla Hunt
For twenty years Judith Crowell owned Berrybridge Gowns and devoted her life to soothing brides, bridezillas, debutantes, prom-goers and the occasional embittered bridesmaid. After they drove her to retirement in 2004, Crowell embarked upon a new career as a freelance writer. Now she has written a satirical book about her adventures in the white-rag trade, A Shop's Fables, which will be released this month. Always eager to compare bridezilla stories, Unreal asked Crowell to dish some dirt.

Unreal: Tell us about the worst bridezilla you ever met.

Judith Crowell: I'm not sure I remember off the top of my head. I need some time to think.

Now about those bridezillas....

A metamorphosis takes place. A woman gets a big rock, and overnight her personality changes. I'm not sure I want to pinpoint anybody who might recognize herself. Oh, my daughter's here, and she just said, "Tell them, 'Your daughter.'"

I took my daughter Lisa to New York on a buying trip with me. We looked at hundreds and hundreds of gowns. In one showroom, she turned really quiet and I looked over and saw she was in tears. She said, "That's my dress!" The style was called Angel. Talk about misnomers! It was not the nickname I would have given her.

Did it have wings?

Too bad. What's the biggest change you saw in the bridal industry?

For years and years, dresses had big, full skirts and lace and frills. Then Carolyn Bessette Kennedy came along in that perfectly simple, beautiful dress. A lot of women were working out and had beautiful bodies and didn't want to hide them under layers of tulle. It put a lot of bridal shops out of business. And this was before my time, but Grace Kelly reintroduced the elaborate, modest wedding gown. It brought back unrealistic expectations. 