Up Next For the Blues: Quickly Come the Kings 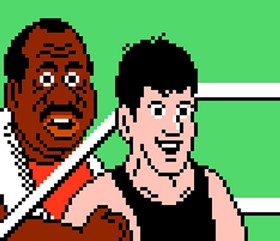 Artist's rendition of Ken Hitchcock running practice up at the Mills right now.
The St. Louis Blues, having defeated their aquatic foes in round one of the playoffs, are now resting quietly, recuperating mind and body to prepare for the next challenge.
It's a little like the dialogue screen from Mike Tyson's Punch-Out, where the opponent would hurl some insult at Little Mac, perhaps questioning why a three foot tall k.d. lang impersonator is trying to win a boxing title in the first place, while Mac's coach offered up some sage piece of wisdom, such as, "Don't let him punch you in the face!" Hopefully Ken Hitchcock is madly mashing the select button right now to build up some extra health for his team.
That's right; I just used a Mike Tyson's Punch Out reference and a K.D. Lang reference in one paragraph. In other news, I'm really enjoying 1988. I'll let Tom Brunansky know you said hi.
Anyhow, now that I've met my contractual obligation of at least one thing per column guaranteed to make any reader think, "Why in the hell am I reading this crap?" we can move on to the actual subject at hand: the Blues second round opponent. We don't know exactly when the series will start yet, but we do know who our beloved Note will be playing. The Los Angeles Kings eliminated this year's President's Trophy winner, the Vancouver Canucks, last night in Vancouver in game five of that series. It sets up an intriguing -- and slightly terrifying -- matchup of defensive powerhouses in the next round.
During the regular season, the Blues ranked number one overall in the NHL in scoring defense, setting a modern era record for the fewest opposing goals allowed. They lapped the field, holding the opposition to 14 fewer goals than the second-stingiest team, 165 to 179. That second-stingiest team? The Kings, of course. That means if you're the sort of hockey fan who really loves the game, but just wishes there was some way the scores could look more like soccer box scores night in and night out, this just might be the series for you.
The Kings boast one of the most talented, if not the most talented, goalies in the NHL in Jonathan Quick. He is the single biggest reason any team should be leery of playing the Kings in the playoffs; we've seen before what teams with transcendent goaltending can do when April rolls around. (Or May, for that matter.) The Kings are a solid defensive team overall, but not an elite one. Jonathan Quick makes them elite.
That being said, Los Angeles is also an extremely limited team offensively, much more so than even the grinding Blues. The Blues, despite the style they play, have some borderline elite talent in terms of forwards; the Kings aren't nearly as talented on that side of the puck. To wit, the Blues compiled a +45 scoring differential during the regular season, with 210 goals scored and 165 allowed. The Kings, on the other hand, came in at 194 and 179, just a +15. Just as in baseball, goal differential is seen as at least as indicative of a team's true talent level, if not more so. By that measure, the Blues are a clearly superior team.
Of course, hypothetical measures don't really matter so much in the real world, and the world of hockey doesn't get any realer than the playoffs. In such a small sample size, anything can happen. And that's why teams with elite goalies become such imposing opponents.
Jaroslav Halak is recovering from the ankle injury he sustained at the hands of Barret Jackman, but even if he comes back you have to believe Brian Elliott will be the starting goaltender for now. He's been nails since taking over for Jaro, and riding the hot hand is a time-honored tradition in the NHL playoffs. The matchup of Quick against the Blues' tandem -- or maybe just Elliott; tough to say yet -- could very well be the deciding factor in this series.
That being said, the Blues should have a fairly significant advantage here. Quick himself is capable of standing on his head on any given night, but the Blues' defense makes it much less likely their goalie, whoever that may be, will have to do the same to keep the opposition off the board. The Kings play a similar brand of hockey as the Blues; tough, physical, and disciplined. But they don't have the same kind of strangling, suffocating defense the Blues do. The style is much the same, but they can't match the kind of constricting effect the Blues manage.
Whenever the series starts, it will be a tough one. Two teams who give up very little, who built their success on keeping the opposition in check, both with elite goaltending and new coaches brought in to right foundering ships. A bit of a funhouse mirror series, really.
The Blues have done something this franchise hasn't accomplished in a decade; now let's see if they can keep that going against an opponent who will be trying to do to them what they have done to everyone else this season.