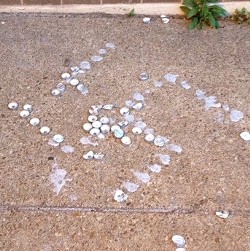 Ryan McKinley
The remains of a swastika left on SLU's campus.

The campus' public-safety department and St. Louis Metropolitan Police are investigating, but police say they haven't identified a suspect.

"It was really horrifying to see a to see a burning swastika outside the building that I live in and realize that this is something that happens on my campus, in my home," says Sarah Nash, a sophomore who lives in the dorm, called Marguerite Hall.

Update: A SLU spokesman says some students reported seeing the candles outside before they were arranged into the shape of a swastika, and it's unclear how or when the candles were rearranged. See the school's full statement below. End of update.

Nash says she saw the swastika after two friends returning home from a bike ride found it and alerted her around 2 a.m. Wednesday.

"We wanted to get to the bottom of it so whoever did it would be talked to, would know it's wrong," Nash tells Daily RFT.

When the campus security finished a brief report and left the scene, Nash and her friends decided to call the police for further investigation.

"We decided to call the police department because the Department of Public Safety kind of wrote it off as a prank, like a kids-will-be-kids kind of mentality," she says. "The three of us felt like DPS wasn't taking it seriously."

See also: Missouri: 10th in Number of Anti-Semitic Incidents in '09

At SLU, we seek to foster an inclusive campus environment where everyone feels welcome, safe and respected. Acts of intolerance are unacceptable and are treated very seriously by the University.

A full investigation into this incident is being conducted by our Office of Student Responsibility and Community Standards in conjunction with the Office of Institutional Equity and Diversity, as well as the Department of Public Safety. Although we are unable to comment in detail with respect to an open investigation, students have reported seeing the candles unlit in a different pattern outside the residence hall earlier in the evening. At this time, we not have determined who originally placed the candles there or for what purpose. We also have yet to determine who is responsible for altering the display, but our investigation is ongoing.

At SLU, we're committed to providing a caring, effective and uniform response to anyone who is affected by a bias incident. We also have a number of programs and policies in place to address them. For example, four years ago, we adopted a new Hate Crime and Bias-Related Incident Protocol that ensures that incidents are addressed swiftly and aggressively, and that counseling and other support services are readily available to victims. Under the protocol, these cases also receive priority in our student conduct system.

Students observed a spiral shaped Swastika lit by candles in the above mentioned location between 1:30 and 3:00am, Wednesday, April 23, 2014. The students contacted Saint Louis University Campus Security and the police department about the incident. No suspect(s) has been identified. The investigation is ongoing.