Update: La Clinica Will Close By May 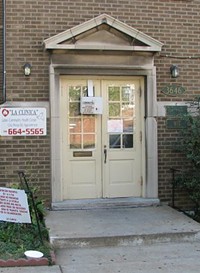 www.laclinica-stl.org
The doors aren't quite closed -- yet.
Since news broke yesterday that the low-cost health clinic just off South Grand would be closing, I've been able to contact two members of La Clinica's board of directors.
Board Chair Mary Ann Cook emphasized that the clinic is still up and operating (in fact she could only talk briefly before tending to patients) and that their phone (314-664-5565) is not disconnected. A previous phone listing on Google caused the mix up.
"That could have scared a lot of people in the community who believed we walked away without thinking twice, which we would never, ever do," Cook said.
As for where La Clinica's patients, most of whom are Hispanic immigrants, will find medical care in the wake of the closure, Cook had this to say: "I can't really say one way or the other. I don't know. There are all kinds of a places for people to go, and I assume they'll go there."
La Clinica board member Barbara Willock, meanwhile, pointed out there's a very real chance that many of the uninsured or undocumented patients will be left with nowhere to turn.
"Some simply won't be treated," Willock said.
What ultimately caused La Clinica to close it's doors?

"La Clinica never had a really firm financial base, a good donor base," said Willock. "When the grant money dried up there just simply wasn't enough money. Even with massive cuts of the budget and reverting back to an all volunteer model of medical care, there's still always keeping the lights on and you've got to have some staff to make appointments. We got the staff down to receptionists, record keepers a director, and a housekeeper. We got it down to six employees but there just simply wasn't enough money coming in. The grant money has gotten quite a bit tighter. It's something the board been wrestling with for years."

As for any last minute fundraising attempts that might save the facility, Willock said:

"The amount of money we're talking about, we have to have a minimum of $20,000 to $30,000 a month and that simply was not coming in...We have a wonderful corps of volunteer doctors and nurses and other volunteers that are obviously very commited to serving this population and would be interested in working with someone else to provide this kind of culturally sensitive care. Hopefully another hospital or community organization can utilize those resources."

Willock added that the Clinic will remain open through the end of the month but they are only seeing patients with existing appointments.