Update: Wash. U. Student to Appear on Jeopardy! This Afternoon 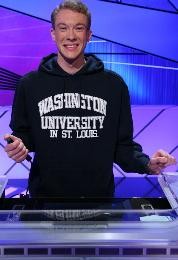 courtesy of Jeopardy!
Wash. U. junior Nick Yozamp is competing on Jeopardy! this afternoon.
Updated February 10: After overcoming a $5,200 deficit in Monday's game, Yozamp advanced to the Jeopardy! College Championship finals, airing tomorrow, February 11, and Friday, February 12, at 3:30 p.m. on KSDK-TV (Channel 5).

Question: Who's appearing in the Jeopardy! College Championship semifinals at 3:30 this afternoon on KSDK-TV (Channel 5)?

Yes, it's true. Last Thursday, Yozamp trounced opponents from Columbia University and the University of Michigan and won $20,000 (approximately half his tuition) with the Final Jeopardy! question "Who is Albert Einstein?" (Answer: "This person appeared on the cover of the 1946 Time magazine with the caption 'All Matter is Speed and Flame.'")

All this despite announcer Johnny Gilbert mispronouncing his name and  incorrectly identifying his school as Washington University St. Louis. "That preposition 'in' is so crucial," Yozamp noted in his blog memorializing the occasion.

Yozamp has been a fan of Jeopardy! since he was six years old. "I shouldn't say that I try to plan my class schedule around Jeopardy!, but I do," he admits on his blog.

Last August he took a 50-question diagnostic test online and in October was invited by the show's producers to Chicago for a formal audition. (He fared much better than Unreal, who also tried out but who has a face made for print.)

The actual taping took place in Universal City, California, during the first week of January. Yozamp has remained mum about whether he advanced to the finals and won the $100,000 grand prize.