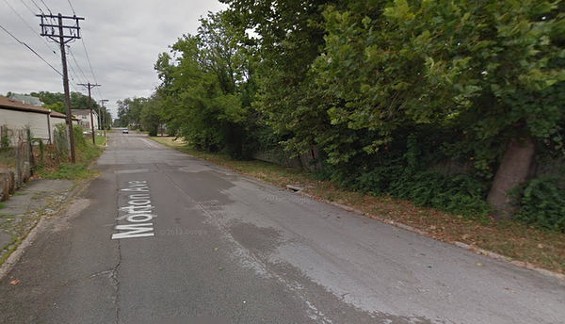 Google Maps
Thomas Allen Jr., drove down this road for two blocks until a Wellston police officer fired three shots at him from inside the car, according to St. Louis County police.

A Wellston police officer fatally shot a 34-year-old man who tried to flee a traffic stop, according to the St. Louis County Police Department. The shooting marks the seventh officer-involved shooting death since August, when then-Ferguson police officer Darren Wilson shot Michael Brown and shone a spotlight on police killings in St. Louis.

Police said a five-year-old girl, the daughter of the driver, was in the rear seat behind the front-seat passenger when a Wellston police officer with more than seven years experience on the force pulled the car over for making an improper left turn.

The Wellston officer checked Thomas Allen and the vehicle for weapons and did not find anything illegal, so he let Allen and the child stay in the back seat of the car while the officer talked to the driver and the front-seat passenger outside of the car.

That's when Allen climbed over the car seat and started driving away -- with the girl in the back seat -- police said.

The officer jumped into the car's open front passenger-side door and tried to stop Allen from driving away, according to police. When Allen accelerated the car rapidly, the officer, who was "in fear of his life as well as the life of the juvenile female in the rear seat," fired his pistol at Allen three times, according to police. The car left the road, crossed an empty lot and hit the foundation of a residence on Chatham Avenue.

The officer has been released from the hospital after receiving treatment for minor injuries to his leg.

Police said the Wellston officer originally pulled the car over for failing to signal and for making an improper left turn that nearly caused an accident with an oncoming vehicle at Page and Morton avenues.

Thomas Allen Jr., of the 2900 block of Wyoming Street, died of his injuries on March 1 at a local hospital.

It all started around 10:15 a.m. Saturday morning when a Wellston police officer, whose name has not been released, pulled a car over near the intersection of Morton and Page avenues, according to St. Louis County police, which is investigating the shooting. Police said the officer was investigating a "traffic violation" but did not offer details about the violation.

While the officer and the driver were talking outside the car, Allen, who'd been seated in the rear driver's side passenger seat, moved into the driver's seat and tried to drive away, police said. The officer jumped into the car to stop Allen, entering through the passenger's side door. As the officer and Allen struggled inside the car, Allen drove north two blocks "at a high rate of speed," according to police. The officer's leg dragged outside the car as Allen attempted to flee, KTVI-TV (Channel 2) reports.

The officer, fearing for his life, fired three shots from his duty weapon, causing Allen to lose control of the car and stop near the intersection of at Morton and Chatham avenues, about one-tenth of a mile north, police said.

Allen and the officer were taken to a local hospital for treatment. Allen died in the early morning hours of March 1.

The killing sparked anti-police brutality protests from Ferguson activists, who are asking the Wellston police to reveal the name of the officer who shot Allen.

Here's the full statement from police:

At approximately 10:15 a.m. on February 28, 2015, Wellston Police Department requested assistance from the St. Louis County Police Department reference to an officer involved shooting. An officer from the Wellston Police Department conducted a traffic stop for a traffic violation near the intersection of Morton and Page. The male suspect, 34 years of age, was seated in the rear driver passenger seat during the traffic stop. As the officer was conducting an investigation of the driver of the vehicle, the suspect entered the driver's seat of the vehicle in an attempt to drive away. The officer, in an attempt to stop the suspect, got into the vehicle on the passenger side, in which a struggle ensued inside the vehicle. As the vehicle traveled a high rate of speed during the struggle, the officer, in fear of his life, fired three shots from his duty weapon. The vehicle lost control and stopped near the intersection of Chatham and Morton. The Wellston police officer, and an assist Wellston police officer, took the suspect into custody without further incident. The suspect was transported to a local hospital for treatment and is currently in critical condition. The Wellston police officer was transported to a local hospital for treatment. This case is under investigation by the St. Louis County Police Department Crimes Against Persons Unit. The identification of the suspect will be released when next of kin has been notified of the incident.