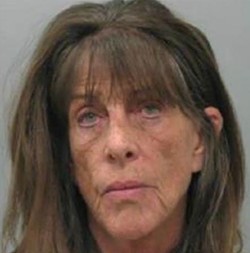 Update: The St. Louis County Prosecuting Attorney's Office has charged Mary Mullenix, 69, in the stabbing death of her husband Ivan, 76, in Country Life Acres, a tiny village near Town & Country. Our original coverage of the incident is below.

The wife, police say, is facing one count of second-degree murder, one count of armed criminal action and another count of tampering with physical evidence. She was brought in for questioning after police were called to the bloody crime scene at around 1 a.m. Thursday morning. Her bond has been set at $500,000.

The probable cause statement says that after she stabbed her husband, she tried to wash the blood off of the knife, which is why she is facing a tampering charge.

Police were called the the home in Country Life Acres, a tiny village near Town & Country at around 1 a.m. this morning.

The domestic incident, police say, was "reported by a family member."

Police have since taken his spouse into custody and she is now facing questioning, officials say.

Police have few details to offer on the homicide as of this writing, and the woman's name has not been released. She has not yet been charged.

Here's KMOV (Channel 4)'s dispatch from the crime scene followed by the full alert from county police officials sent out this morning.

The St. Louis County Police Department received a call at around 1 A.M. on Thursday, July 18, 2013 to assist the Town and Country Police Department on an apparent homicide that had occurred on Country Life Acres Dr. Town and Country had earlier responded to a domestic incident reported by a family member where a 76 year old man had died from an apparent stabbing. The victim has been identified as:

The victim's 69 year old spouse has been taken into custody by the St. Louis County Police Department Crimes Against Persons Unit and is being questioned relative to the investigation at this time. No other information is available currently. If charges are issued through the St. Louis County Prosecuting Attorney's Office at a later date, information will be released.