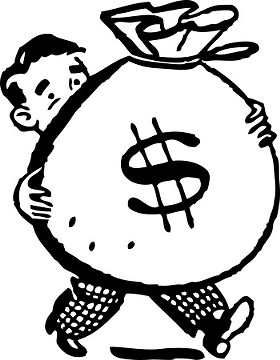 Image via
Josh Gould bamboozled dozens out of about $4 million
Update added after the jump at 4:41 pm, March 3

Josh Gould of University City, a 31-year-old former securities broker for Woodbury Financial Services, is finally being indicted today after admitting to stealing some $4 million from dozens of his Orthodox Jewish coreligionist clients over the past two years.

Gould eventually plans to plead guilty to one count of mail fraud and one count of wire fraud, according to his attorney, Al Watkins.

Gould is the son-in-law of Jonathan Spetner, the well-respected third-generation operator of Spetner Associates, a local insurer.

Gould is also the guy who's recently been dancing as a statue of liberty at Watson and Laclede Station roads to make a buck -- see our previous coverage.

We've learned that another person implicated in this matter will also be indicted today; check back for updates this afternoon.
Update: Gould has been indicted along with David Rubin of Chesterfield-based Coral Mortgage Bankers Corporation. The government's allegations more or less square with what Watkins originally told RFT (although the defense attorney tends to portray his client as both a repentant thief and, to some degree, a victim of Rubin).

This is how the indictment says things went down: Rubin found an investor who was willing to part with $1.2 million. This investor believed his funds were going into a private trust account that would serve as collateral for Coral Mortgage. But instead, Rubin allegedly used the cash to pay himself a salary and cover an out-of-court sex discrimination lawsuit.

He gave the rest to Gould, who used it on all kinds of personal and business-related expenses, including kitchen renovation and trips to East Side strip joints such as Penthouse and PT's.

(As Watkins told it in our first post, Gould spent money there only to entertain people who could help build his online ticket businesses such as The Sports Nook and True Hockey, which he desperately needed to grow in order to pay back Rubin's sugar daddy investor).

According to Count II of the government's case, Gould also pilfered $3.5 million from his Woodbury Financial Services clients.

We'll post the actual indictment as soon as it becomes public. For now, here's the press release:
US Attorney - Gould and Rubin press release