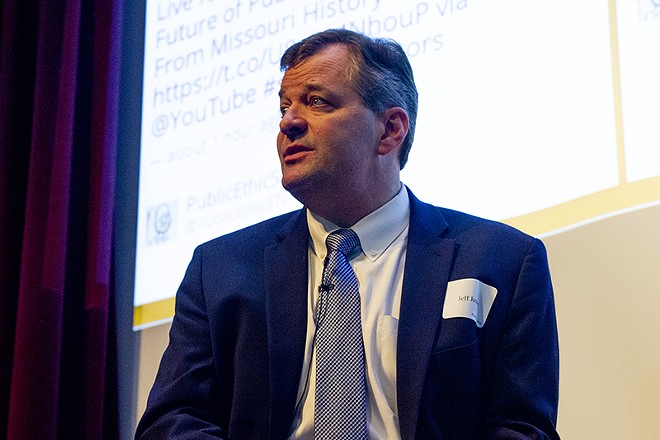 
Jeff Jensen, the U.S. attorney for the Eastern District of Missouri, announced on Thursday he is resigning, effective December 30.

A Trump nominee, Jensen will slide out ahead of President-elect Joe Biden's inauguration, which very well may have led to his ouster anyway as the new administration makes new nominations.

As the U.S. attorney in St. Louis, he's taken an aggressive approach to prosecuting crimes in the city. Robberies and drug possession cases involving guns that would have normally been run-of-the-mill prosecutions handled at the state level by the St. Louis circuit attorney were kicked up to the federal level by the hundreds under Jensen.

Despite his zeal for sweeping up cases, Jensen managed to avoid the public controversies that often follow such turf battles and maintained a relatively low profile — for the most part. He popped up in national press earlier this year when Attorney General William Barr, who is also resigning this month, tapped him to review the case against Trump's former National Security Advisor Michael Flynn.

Flynn had pleaded guilty to a federal crime and admitted he'd lied to the FBI about discussions with a Russian ambassador. Under pressure from Trump, Barr ordered a probe of the voluntary plea, an unusual move for a Department of Justice that typically doesn't try to undo its own work. Jensen, a former FBI agent, reviewed the case and concluded that the DOJ should scrap the case.

Flynn was never sentenced and has remained a Trump loyalist. He was rewarded last month with a pardon.

In a news release on Thursday evening, Barr praised Jensen as a professional and dutiful servant.

“Jeff Jensen brought unparalleled experience to the position of United States Attorney as a former FBI Special Agent, Assistant United States Attorney, and private attorney," Barr said. "Since his first day in office, Jeff’s mission has always been the same: to save lives. The extraordinary number of federal prosecutions initiated during his tenure are a testament to that mission. But, Jeff’s efforts were not only limited to the Eastern District of Missouri. Whatever requested of him by the Department of Justice, no matter how big or small, Jeff was always willing to serve."

Jensen also backed a Barr-favored initiative called Operation Legend that targeted violent crime. St. Louis was one of multiple cities across the country that participated, and Barr visited in October to claim success. As the RFT's Danny Wicentowski reported, the gaudy stats turned out to be wildly misleading. Despite claims that the operation cut homicides by 49 percent in the city, for example, St. Louis is on pace for its deadliest year in generations.

While Jensen made violent crime his main focus, it was the prosecution of now-former St. Louis County Executive Steve Stenger on corruption charges that leaves one of the most memorable marks of his tenure.  Jensen recused himself from the case, but one of his biggest hires, Assistant U.S. Attorney Hal Goldsmith, led the prosecution that sent Stenger and his co-conspirators in a pay-for-play bribery scheme to federal prison, upending county government.

Under Jensen's watch, federal prosecutors also indicted multiple police officers, including five St. Louis cops accused of beating and/or covering up the beating of an undercover police officer embedded with police protesters. The cases didn't extend to officers accused by protesters of beating plenty of non-cops, but it did reveal in recovered text messages the eagerness of the indicted officers and others for clobbering demonstrators following the acquittal of ex-cop Jason Stockley in 2017.

Reuters reported that Jensen had sought a sweeping investigation of the St. Louis police department after the violent response to protests. The news agency cited an unnamed lawyer who claimed Jensen sought approval for the "pattern or practice" investigation from the Trump administration but was "shut down pretty hard." Jensen later told the St. Louis Post-Dispatch the report was "simply not true."