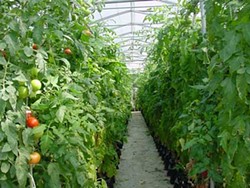 "We can convert vacant buildings into large, sustainable hydroponic produce centers," says Holsman. "The urban farms would create much needed jobs in the inner city and generate revenue in unused buildings."

Under Holsman's bill, a group of state reps and senators are to study ways to bolster the nascent urban farm movement that's already found some footing in St. Louis with groups like City Seeds. Holsman's plan, though, is to create ways that St. Louis and Kansas City could find ways to farm 12 months out of the year.

"Rather than eating food shipped halfway across the nation filled with preservatives and pesticides, we could have a year-round supply fresh produce while creating jobs for the urban core," says Holsman.