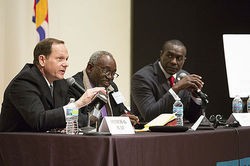 Ahead of a day of action at City Hall this afternoon, Mayor Francis Slay's office has just released a statement formally declaring the consulting contract with Veolia "on hold."

The contract between Veolia, the largest water service provider in the world, and the city's water division was destined for a quiet approval back in December. However, after Riverfront Times broke news of the deal, a coalition of local activist groups representing environmental, labor, and social justice interests made Veolia into a mayoral campaign issue.

"I understand there are constituencies who have other questions about the contract and its place in international politics or its potential impact on the environment," Slay's statement says. "They deserve to have their questions answered and their concerns addressed."

The release is the first formal announcement on the status of the contract -- the subject of our recent cover story -- since it was put in limbo at a contentious Board of Estimate and Apportionment meeting in December. Eddie Roth, the mayor's deputy of operations and the point person who has been meeting with opposition groups, says the release was intended to clarify that no action is going to be taken on the contract at today's E&A meeting, nor for that matter at any future meeting without "abundant advance notice."

A diverse group of activists from the coalition Dump Veolia is coming to the meeting today anyway, as a demonstration of numbers and opposition. They include the St. Louis Palestine Solidarity Committee, Missouri Coalition for the Environment, and a new partner in the Boston-based group Corporate Accountability International, whose director traveled to St. Louis to attend the City Hall meeting this afternoon. In response to the mayor's announcement, Dump Veolia has released its own statement:

"There has been three months of citizen opposition to this contract, which only continues to grow. There is no 'pro-Veolia' constituency, unless Mayor Slay is contending that Veolia is a citizen of St. Louis City. There are no more reasons to delay. The contract was not on the agenda last month and engaged citizens concerned about the water pushed it on the agenda by their presence. We will be there today," -St. Louis Dump Veolia Coalition.

Roth's work on the issue started some weeks ago, but he says he's now formally added sustainability director Catherine Werner to the task. He says he won't accept a solution to the controversy that takes place "behind the scenes" (such as Lewis Reed's office's suggestion that the search committee simply go back to the table and find a contractor other than Veolia). He also cautions, as does the release, that Veolia's involvement with Jewish settlements in the Middle East is not one he feels the city can address.

"The Palestine-Israel issue is something we're happy to hear, but I don't think there's very much we can do about that," he tells Daily RFT. "We see the labor issues and the environmental issues as presenting real opportunities for back and forth dialogue, to make sure that we move in a way that's smart and is attentive to people's sense of risk."