Very NSFW: Is This the Official KC Royals Mascot Getting a Lap Dance? 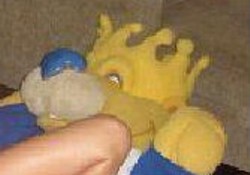 The guys over at Deadspin unearthed a little Twitter mystery over the weekend. A tipster tagged them on a photo that appears to show Sluggerrr -- the beloved mascot of the Kansas City Royals -- taking in the sights and sounds of a very adult house party.

The image below is absolutely, 100 percent not safe for work, as it shows a young lady giving Sluggerrr a very clear view of home plate.

Since Deadspin wrote about the picture last night, @johnnyo57 or "John OConnor" has changed his avatar and his Twitter bio, but the original tweet and image remain. According to the website, "OConnor" did not take the picture himself, but got a copy from "a friend" who was there and documented the mascot getting nas-cot. For your horror and amusement, we present Sluggerrr:

The image raises a number of questions, chief among them: Where are the eyeholes on that thing? In the mouth?

OK, OK, but seriously. Is this the real Sluggerrr on an official, Kansas City Royals-sanctioned job ($150 for 30 minutes at schools, $175 for 30 minute "special occasions," $400 an hour for corporate events)? Let's examine the evidence.

First of all, this suit looks a little small. Check out some recent images of Sluggerrr here -- the head piece appears to be much bigger. And the groin-grinding lion's uniform also appears to be outdated. On the other hand, a quick search of Google, eBay and even Etsy came up with zero available Sluggerrr suits, and even in this blurry, pelvic-thrust-obscured image, it looks like a professional mascot costume. Perhaps a fan got a hold of an old suit he (or she) trots out for furry-themed bachelor parties?

Daily RFT put the question to the Kansas City Royals media team -- we've yet to hear back.

In the meantime, what do you think? Is this the real Sluggerrr or a just a posuerrr?