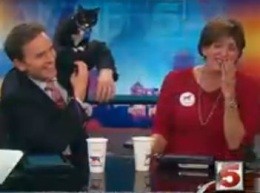 Not as incredible for her poor co-anchor, Pat McGonigle, whose suit may need cleaning (or replacing) after a cat had "an accident" on him.

This was yesterday morning, at 6:28 a.m., to be exact. (Temperature outside was 38 degrees.)  They were talking about Purina's Pet Debate, wherein people vote on whether the USA is a dog nation or cat nation, or some such bullshit.


(Just kiddin', it's actually a good cause: if you vote, Purina gives $1 to a program that matches up pets with veterans who could benefit from a furry friend.)

So McGonigle has this six-month-old cat named Raven in his arms, who at some point climbs up onto his shoulder.

Blome starts laughing in the middle of a sentence and says, "I think something bad just happened."

McGonigle: "Did he do something on my jacket?"

Blome: "Is that a good suit?" For the rest of the segment, she bobs in and out of hilarity, and by the end produces a tissue to dry her merry eyes.

Daily RFT has not yet determined if the cat went number one or number two.