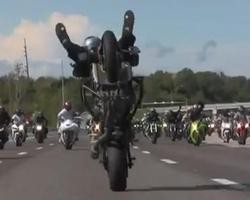 YouTube
Imagine this in your rearview mirror. Not distracting. Not at all.
It's called the "Ride of the Century" even though it happens once a year on the interstates running through St. Louis.

Last weekend the motorcycle stunt team Streetfighterz, hosted its 2011 edition of the ride. As local media has reported, the hundreds of riders who turned up for the event wreaked holy terror on motorists on the highway.

At least one participant from last weekend's Ride of the Century remains hospitalized after being struck by a pickup truck along Interstate 270. Another motorcycle rider hit a car on Highway 40 and went flying fifteen feet through the air but somehow was able to leave the scene relatively unscathed.

Complaints of dozens of other bikers speeding down the highways while performing stunts now has law officers on notice. St. Louis County Police and the Highway Patrol promise to crackdown on any future events. Meanwhile, James Vaughn, who co-founded Streetfighterz Productions in 1999, can't understand all the negative attention his group is getting.

"We've always gotten kind of a bad rap in the press, and maybe rightfully so in the beginning," Vaughn tells the Post-Dispatch. "But for the last six or seven years, we've pretty much kept to ourselves."

Really!? Check out the following YouTube clips and judge for yourself.

In the video below from the 2009 Ride of the Century bikers pop wheelies on I-270, shut down Interstate 170 to perform 360s and ride on sidewalks.

Last weekend's Ride of the Century (below). Nothing illegal going on here.