She urged her colleagues to vote against the Respect for Marriage Act, which passed soon thereafter 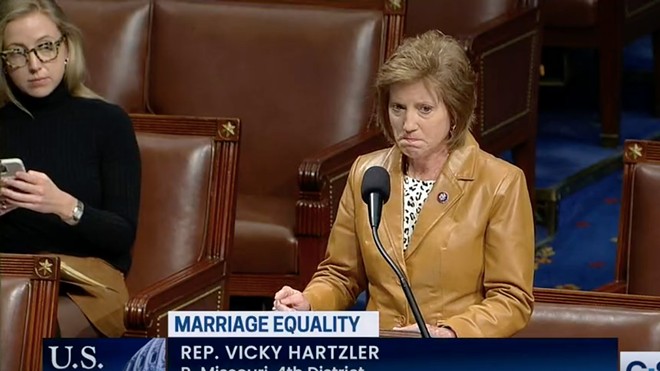 The House of Representatives passed the Respect for Marriage Act Thursday, codifying federal protections for same-sex and interracial couples. But not before Missouri's own congresswomen Vicky Hartzler (R-Harrisonville) broke into tears urging her colleagues to vote against the measure.

In her remarks on the House floor prior to the vote, Hartzler referred to the bill as the Disrespect for Marriage Act, saying that its implication was that the country had to "submit to [the Democratic party's] ideology or be silenced."

Hartzler's voice grew more impassioned as she spoke, saying, "I'll tell you my priority, to protect religious liberty, protect people of faith, and protect Americans who believe in the true meaning of marriage."

At this point, her voice cracked noticeably as she spoke through tears: "I hope and pray that my colleagues will find the courage to join me in opposing this misguided and dangerous bill." See the speech below:


The tears did not seem to have much of an impact as the bill passed 258 to 169 shortly after her speech. Several Missouri representatives, including Emanuel Cleaver, (D-Kansas City) and Cori Bush (D-St. Louis), voted for it.

Representative Ann Wagner (R-Ballwin) was one of about 40 Republicans who supported the bill. Wagner is considerably more moderate than many others from her party representing the Show-Me State in Washington.

To Hartzler's point about religious liberty, the bill itself contained religious liberty protections, which Republican senators like Missouri's Roy Blunt and Utah's Mitt Romney cited as key to their support for the Senate version of the bill.

A provision of the bill prevents religious groups from being forced to provide marriage "services, facilities, or goods" if doing so runs counter to their beliefs.

With the bill having already passed the Senate, it is headed to President Joe Biden's desk, where it is expected to be signed into law.

The impetus behind the Respect for Marriage Act stems in the Supreme Court's decision in Dobbs v. Jackson Women's Health, which removed the federal right to an abortion and which some worry provided a foundation for the removal of other rights based on the Constitutional right to privacy.