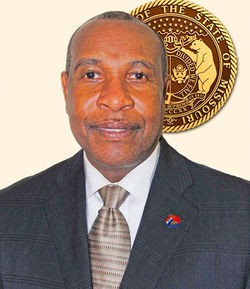 Over the course of several months in 2011, eight police officers for the city of Vinita Park were fired, resigned or took jobs with other departments. This was an unprecedented amount of turnover in the small north-county town. More than half the department, including the chief, was suddenly gone.

According to a lawsuit filed by five of those officers, Vinita Park city officials terminated or forced the officers out because they are white. African American officers kept their jobs, and the majority of the replacement hires were black also.

The allegation might sound far-fetched, but attorneys for the officers believe they have a smoking gun -- a secretly recorded conversation of Vinita Park mayor James McGee, the subject of this week's cover story. On the tape, McGee speaks in blunt terms about racial tension in the city and his role in the termination of the white police officers.

McGee is the town's first black mayor; he was elected in 2010. His predecessor, Virginia Bira, held the office since 1984.

A year into his term, the racial makeup of the six-member board of aldermen changed also, unseating two of the town's four white office holders and replacing them with African Americans who were very supportive of the mayor. One of the incumbent aldermen, Celeste McGee, is the mayor's wife.

Tom Carlson
Read the full story of James McGee and the city of Vinita Park here.

After the board changed, the terminations in the police department rained down. All hirings and firings are handled by a board vote, and though Mayor McGee only votes in the case of a tie, many of his critics say the African American board members always vote the way he wants them to.

The board voted not to reappoint the city's chief of police and to fire four officers. Two more white officers say they were forced to resign and two left for other departments. A year after the first firings, five former officers sued the city for discrimination.

A month later, a former city employee named JaCola Williams made the recording of McGee on a cell phone. Williams had her own troubles with McGee -- she's alleging sexual harassment -- and hoped to record him saying something she could use to prove her case.

On the tape, McGee can be heard bad mouthing the previous, white mayor's administration, lamenting his pay, and talking about the changes in the racial make-up of city hall and the police department.

Continue for a three-minute excerpt and transcription of the tape.