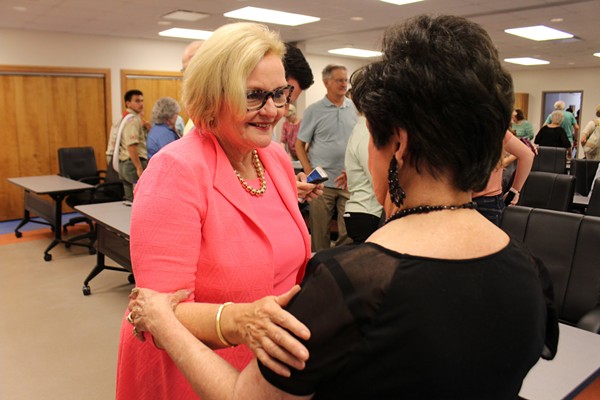 Listen up, hippies: November 6 is not the primary. This is a real-ass election day. You can whine about how you’d like more choices or a viable third party or whatever, but if you are any type of lefty and you aren’t voting for Claire McCaskill, you are also a raging moron.

Your vote here matters. It carries real, heavy, possibly irreversible consequences. But yeah, you like to vote with your little bleeding heart, don’t you? Well, don’t worry, wimp! The good news is that you should totally be “voting your conscience” this time because your stupid conscience should be saying this to you: “Good gravy, Josh Hawley must not win! Anyone but Josh Hawley!”

And that means that your only real option is Claire McCaskill.

Maybe you don’t really like Claire McCaskill. That’s fine. Is she perfect? Nope, she isn’t. And sometimes she’s downright infuriating, too. She sure disappointed the shit out of her base last month when she waited until the last minute to say that she’d vote against Brett Kavanaugh. And just this week she was on Fox fucking News talking about the “crazy Democrats” who confront politicians in public places. Then she also talked about not getting along with Elizabeth Warren and stressed how she disagrees with Bernie Sanders “on a bunch of stuff.” Ugh.

Why does she keep doing this shit? It's because she naively thinks she’s going to win over some Republicans — but it's useless, they have their little twerp all picked out already. The only thing she’s doing is making it harder for liberals to vote for her. But still, vote for McCaskill we must. It’s called LEV, or Lesser Evil Voting, and if it’s good enough for Noam Fucking Chomsky then it’s good enough for you.

Because guess what? If Josh Hawley wins this election, this state (and maybe even this nation) is screwed. Do you know what Hawley is up to? He’s in favor of eliminating the separation of church and state, for one. And he’d just love to outlaw abortion. He seems to be tight with people who hate gays and the bootlicker also sides with Donald Trump on literally everything. He will also jump on the first opportunity to take away your health insurance. Yes, yours. Josh Hawley must be stopped now before they send his puny ass to Washington and groom him as the younger, more weaselly version of Mike Pence.

If Hawley’s plan for America sounds like something you don’t want, there is really only one way to vote. Remember when a whole group of high-horse-riding fuckers refused to vote for Hillary Clinton? Now we have to deal with this complete nightmare of an administration. This is the 2018 version of that. You can cry about it if you must, but how you vote in the election next week could well determine the fate of the U.S. Senate. And if you think Trump is terrible now, just wait til you see him after his party manages to hold onto power in a midterm election. It's bad enough the GOP has the bare majority it's got now; depends on how things break in states like North Dakota and, yes, Missouri, it could get even worse.

Please understand: a vote for anyone except Claire McCaskill is a vote for Josh Hawley and a vote for Trump. Sucks, doesn’t it? Well, it’s a two-party system. Sorry 'bout it. You have to pick somebody on the ballot. OK, you can vote the Green or the Libertarian or some guy who claims to be nothing but Independent, but to vote for one of these three in a race this tight amounts to literally just throwing your vote away.

What’s that you say? Yes, it sure would be dreamy to vote for somebody instead of always just voting against somebody, wouldn’t it? But that’s not how the world works, does it, sugar plum? It’s truly adorable that you’ve somehow grown to become a full adult in the United States and yet you’re still concerned with childish concepts like what is “fair” or what “should” happen in government.

If you feel that you simply must express yourself, go paint a painting right after you check your fuckin' privilege, you precious little freethinker. The voting booth is not the place to try to make a grand gesture or pat yourself on the back or assert your moral superiority over the system: It’s the place where we go to hold off evil for as long as we can. Being a good voter is about being a responsible American who does what’s best for all of the people, not just what feeds your own self-righteous ego.

So vote for Claire McCaskill. And grow the fuck up.

Jaime Lees is the RFT's digital editor (and she's voting for McCaskill). Email her at [email protected]