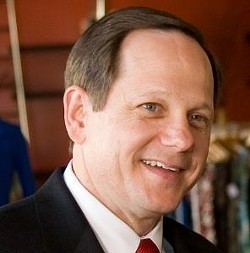 Mayor Slay/Facebook
Slay wants to hear your thoughts on pot.

The mayor's office wants to know what St. Louisans think about legalizing marijuana, so it put out a poll. The results aren't surprising: People want it legalized.

The ten-question poll asks respondents about their views on legalization, the effect on crime and how marijuana should be regulated if it were to be legalized. After taking the poll, the results from all participants are shown. Here were the results at the time of writing (we'll update if things change):

Do you favor or oppose the complete legalization of marijuana for any purpose by adults?

3 percent didn't care either way (too high to care, obviously).

The poll broke it down by gender, and the ladies were slightly more likely to oppose it, with 6 percent against legalization as opposed to 4 percent of guys. But 4 percent of women compared to 2 percent of men "didn't care either way," suggesting to this blogger that a few more women than men were just too stoned to give a simple answer to a simple question.

The poll also asked: If the sale and possession of marijuana by adults were made legal, do you think it would make the state's economy better, make the economy worse, or have no real effect on the economy?

To really ask this question, one needs to know how much weed would be allowed and whether that amount is compared to how much alcohol we're allowed to buy or possess. Considering that it's legal -- and not uncommon-- for an individual to buy a few kegs, have a stocked home bar, or build a wine cellar in one's basement, the equivalent of those legal rights in respect to marijuana would take a lot of consideration and probably deliberation. That being said, here is how St. Louisans responded to the question as asked:

However, 33 percent said marijuana should be less regulated than alcohol.

"Say what?" said every brewery in St. Louis.

The most telling answer was to the question about whether people should be incarcerated for having marijuana if it's not legalized in Missouri. Ninety-nine percent of respondents said no.

Only 1 percent of respondents said people should be imprisoned for pot.

What the hell is wrong with the 1 percent?

Here's a link to the poll. Let us know how you responded.