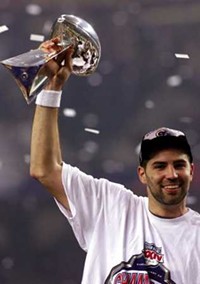 Statistically it was Kurt Warner's day. He threw for 377 yards, completed 31 of 43 attempts and connected for three touchdowns.

But it was Warner's lone interception -- a 100-yard pick by James Harrison for a touchdown in the first half -- that kept the Arizona Cardinals from winning Super Bowl 43.

And oh what a game it was. Warner and receiver Larry Fitzgerald rallied from a 20-7 deficit to take the lead 23-20 with just over two minutes left in the game. But the Pittsburgh Steelers would answer thanks to Santonio Holmes, who somehow got both feet in the end zone for Ben Roethlisberger's only touchdown pass of the game with just 35 seconds left to play.

After the game the 37-year-old Kurt Warner told NBC that there was "definitely a chance" that the Super Bowl would be his last game in the NFL.

I doubt it. The 2000 Super Bowl MVP (pictured above) was just too close to once again hoisting that Vince Lombardi Trophy over his head. And if the NFC West is as weak next season as it was this year, what's to stop Warner from once again leading the Cardinals to the playoffs and perhaps another super Super Bowl?

What do you think? Will Warner retire?