Wash. U. Scientist Discovers Why One of Saturn's Moons Looks Like a Giant Walnut

If life as we know it exists elsewhere in this solar system, it's not likely to be on Iapetus, the third-largest of Saturn's 62 moons. For one thing, Iapetus is made almost entirely of ice. But Iapetus is interesting to earthly scientists for other reasons, namely that it resembles the universe's largest walnut. 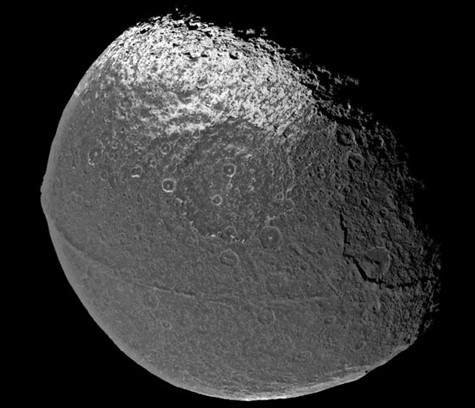 image via
It only looks like the universe's largest walnut, but it's really Iapetus, one of Saturn's many, many moons.
Like a walnut, Iapetus is not quite spherical and is covered in craters that look like little dents at a distance of several million miles. What completes the uncanny resemblance is the enormous ridge that extends three-quarters of the way around the planet's equator. It's approximately 350 miles long, 62 miles wide and, at some points, 12 miles high, and it's easily visible from outer space. (For comparison's sake, Mount Everest is a mere 5.5 miles tall.)

For years, scientists who make it their business to think about these things have wondered what happened to give Iapetus its unique appearance. Now William McKinnon, a professor of earth and planetary sciences at Washington University, says he has a pretty good idea: an enormous and dramatic interlunar crash between Iapetus and another, smaller moon.

Once upon a time, McKinnon and his fellow researcher Andrew Dombard, a professor at the University of Illinois at Chicago, postulate, Iapetus had a moon of its own. Over time, Iapetus's stronger tidal forces destroyed the other moon's orbit and, eventually, the moon itself. The little moon broke into thousands of smaller particles that settled in a ring around Iapetus's equator. (Imagine Saturn orbited by another miniature Saturn.)

Eventually, the tidal forces that held the ring in place grew even weaker and the particles slammed into Iapetus.

image via
A closer view of the ridge, taken by the Cassini satellite camera, which visited Iapetus in 2007. The satellite also took video.
"Imagine all of these particles coming down horizontally across the equatorial surface at about 400 meters per second, the speed of a rifle bullet, one after the other, like frozen baseballs," McKinnon said in a press release. "Particles would impact one by one, over and over again on the equatorial line. At first, the debris would have made holes to form a groove that eventually filled up."

McKinnon adds that Earth is in no danger of suffering a similar shower because the moon is actually moving farther away. "But if we were to bring our Moon inside what is called geosynchronous altitude, that special altitude where TV broadcast satellites (and other objects) are able to hover over one spot on Earth as they orbit, then the Moon would actually spiral in toward Earth," he explained. "Eventually our Moon would break into a ring of particles as it got very close and was torn apart by tides, and then those particles would enter the atmosphere and bombard the Earth at the equator."

image via
The Dark Side may be attacking Iapetus. Or it could just be bread mold.
Other scientists have come up with theories about Iapetus's ridge, mostly involving volcanoes and earthquakes, but McKinnon and Dombard are the first to explain why the ridge is so perfectly aligned along Iapetus's equator. They will present their findings tomorrow, December 15, at the fall meeting of the American Geophysical Union in San Francisco.

So far, McKinnon and Dombard have only done a lot of math to arrive at their theory. The next step will be to build a model that simulates the great crash. This may also help explain the giant dark stain that covers part of Iapetus. Or maybe it's just a sign of the impending forces of the Dark Side.