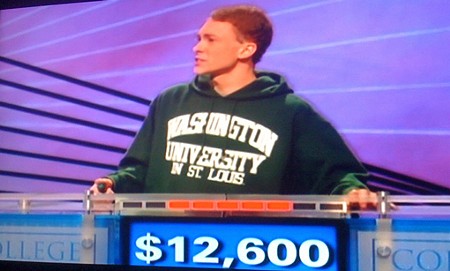 Nick Yozamp on television Friday afternoon. He won $100,000 during the college week for Jeopardy!
It will be quite awhile before Nick Yozamp is ever in jeopardy of missing a rent payment.

The 20-year-old biology major at Washington University has just won the 2010 Jeopardy! College Championship and will be heading home with a cool $100,000 in his pocket.

A native of St. Cloud, Minnesota, Yozamp emerged atop of the heap after outplaying fourteen undergraduates during the two-week competition.

Yozamp provided the incorrect question to this answer on Final Jeopardy's "Biblical Kings" category during the 3:30 p.m. CST telecast today:

These 2 men first meet in 1 Samuel 16 when one becomes aware of the musical talent of the other.

Yozamp incorrectly answered Ramses and David (the correct answer was Saul and David) -- but he had a cushion of more than $10,000 -- safely making him the winner of the show's college week. (We blogged about Yozamp earlier this week here and about Alex Trebek's nasty comments here.)

So how will the student spend his earnings? He's going to Europe, baby! And of course, he intends to use the rest to pay for medical school. Here's a press release issued just this afternoon regarding Yozamp's win:

"I've watched hundreds of contestants being introduced on Jeopardy! from home, but to actually be one of those contestants was simply amazing," said Yozamp. "Seeing Alex Trebek in person walk through the set's glass doors and greet each of us was a moment that has been permanently etched in my mind."

When asked about his plans for the cash prize, Yozamp replied, "I am already planning on going to Nice, France, this summer as part of a study-abroad program at my school. My winnings will certainly pay for this trip! I intend to save the rest of my earnings for medical school; the $100,000 will go a long way in paying for the tuition."

Ryan Stoffers, a sophomore at University of California, Los Angeles, finished second in the competition, winning $50,000. Third place winner Surya Sabhapathy, a senior at University of Michigan,won $26,600. Jeopardy!, the winner of 28 Emmy awards since its debut in 1984, was inducted into the Guinness Book of World Records for the most awards won by a TV Game Show. The series is the #1-rated quiz show in syndication with nearly 9 million daily viewers.