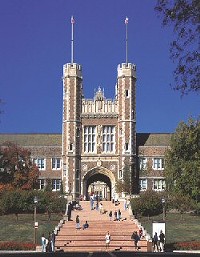 St. Louis attorney Jerome Dobson won an age-discrimination lawsuit yesterday against Washington University. The suit, heard before a jury in St. Louis Circuit Court, claimed that the university forced renowned lung surgeon Joel Cooper out of his job as he approached age 65. Cooper, now with the University of Pennsylvania, was the first surgeon to perform a successful lung transplant.

The St. Louis Business Journal reports that Washington University must pay Cooper $325,000 in actual damages and $200,000 in punitive damages. Cooper had sought $14 million. Still, the doctor called the ruling a matter of principle.

In 2006 attorney Jerome Dobson filed a similar age-discrimination suit against University of Missouri - St. Louis on behalf of the school's baseball coach, Jim Brady. A jury awarded Brady almost $2 million in that lawsuit. In 2007, a happy Brady told RFT: "My attorney Jerome Dobson served them (UMSL) a heaping helping of humble pie. They should still be choking on it."