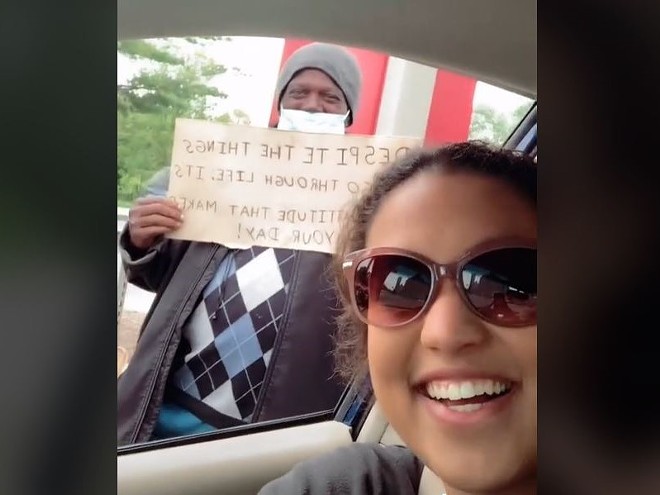 SCREENSHOT VIA TIKTOK/maya2960
As shown in a viral TikTok, St. Louis college student Maya Nepos and a recipient of her care packages.

"I have a fuck ton of meal points — and I only have 48 hours to use them." So began a now-viral TikTok from Maya Nepos, a Washington University senior who found herself with a $600 stockpile of unused credits from her prepaid meal plan — and an opportunity to do some good for St. Louis' unhoused.

On May 11, Nepos uploaded the first of several videos chronicling what was, at first, a quest in pure food-buying excess, as Nepos tried to burn her meal points on, well, meals, starting with a steak dinner for her best friend and escalating to a literal duffel bag stuffed with junk food.

But with the time ticking down, sheer gluttony wasn't going to cut it. She still had more than $400 left.

"I had to think bigger," she explained on the TikTok, which characteristically zips around in quick cuts as Nepos snappily narrates her plot.

Adding masks and other items, Nepos used her meal point stash to create care packages for people living without homes, documenting her drive as she distributed the supplies across the city.

Six million people watched — and some joined in, donating additional funds for Nepos to use on care packages and food.

BETTING IS NOW OPEN: Can I spend it all in time?!?!? ##college ##payitforward ##donate ##adventure ##student


The next day, as the deadline approached, Nepos returned to a campus store with the idea of buying items to donate to a local food bank — but the shelves were already being picked clean by other students.

As she documented in a follow-up video, she settled on making more care packages to distribute around St. Louis and East Louis. She also returned to a man named Darryl whom she'd encountered on a street corner and brought him a burger and fries from Shake Shack.

At the end of two days of pulling off a "Brewster's Millions"-style challenge, Nepos' TikTok ended with her back at home and getting ready for bed.

"Long story short," she said, "I'm out of meal points, and I want to sleep for a year."


Now, to be fair, it turns out that Washington University has a program that allows students to donate unused meal points to an on-campus food pantry, but Nepos told Fox 2 on Wednesday that she found out about that option only after she had just spent two days driving all over the city.

Still, she said the 48-hour spring was worth it.

"Meeting people and having a face and a name and being like, ‘Hi I’m Maya, would you like some food?’ It’s a lot more personal. It gives people a lot more hope."