The St. Louis Metropolitan Police Department was warned police officer Mark West was a problem years before he was arrested this week on charges he repeatedly molested a young girl.

As early as 2017, people in and out of the department were complaining to police brass about West's Facebook posts, which included racist memes and celebrated violence against police protesters. At the time, West had a public Facebook page, where he reposted scores of right-wing memes. Many featured slurs against Muslims. 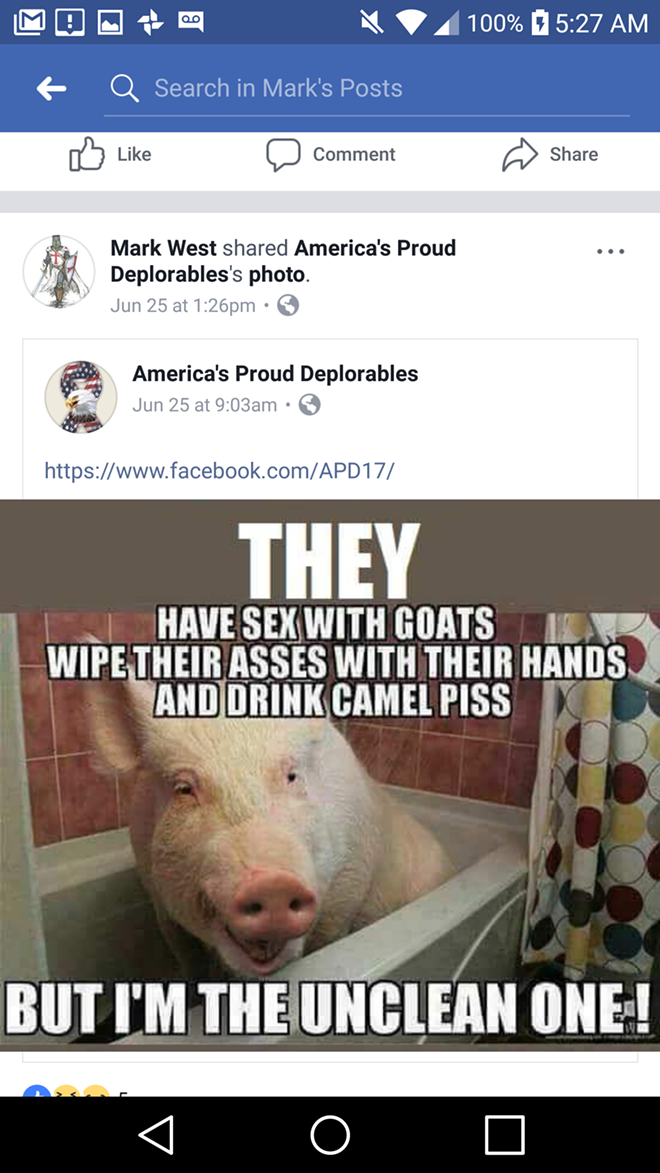 SCREENGRAB
One of the posts on Mark West's Facebook page.

Whether West faced any discipline is unclear. A department spokesperson wouldn't discuss any complaints against the officer, citing a policy against speaking about "personnel" issues. But West, who had been named the 2016 officer of the year in the city's First District, remained on the force. He was at the station on Monday when Missouri state troopers took him into custody on three felony charges of molesting a child younger than twelve years old.

Prosecutors in Ste. Genevieve County, where West lives, claim in court records that the officer abused a girl he knew in recent months in a swimming pool in the county. In a news release on Wednesday, investigators with the Missouri State Highway Patrol suggest there could be more victims and ask anyone with information to contact them.

The charges against West were handed up last week but temporarily sealed after prosecutors told a judge they were concerned that, as a police officer, he had access to guns and could harm himself or others. The court records were only unsealed, with his address redacted, after West was arrested. He has since bailed out of the Ste. Genevieve County jail.

"I'd love to talk to you, but I can't make any statements," he told the RFT.

West started with the St. Louis Metropolitan Police Department in January 1994. On Facebook, his profile picture was an illustration of a sword-carrying crusader. It appears to be a depiction of Knights Templar, imagery that white supremacists have adopted and displayed in recent years, including during the deadly Charlottesville rally. West also shared posts from a Three Percenters page, a group whose supporters, federal prosecutors allege, took part in the January 6 attack on the U.S. Capitol. 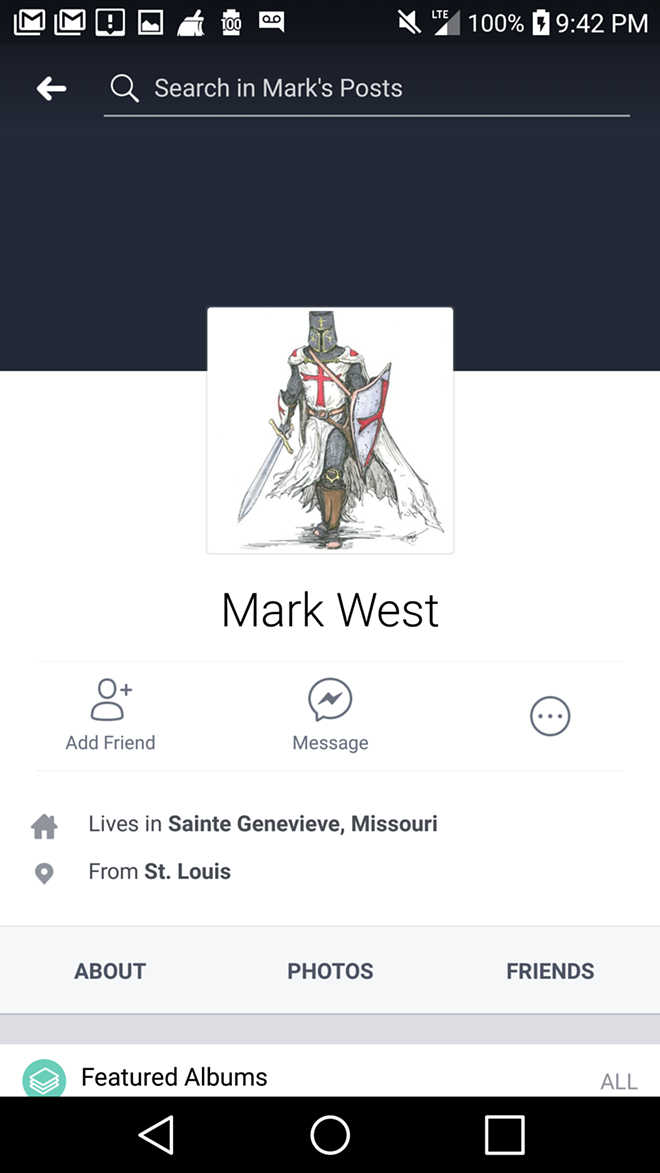 Complaints about posts by West and other officers were a precursor to the exposure of dozens of current and former city cops in 2019 when a Philadelphia-based organization called the Plain View Project released a database of officers in eight cities and their racist or otherwise disturbing social media posts.

In October 2017, independent journalist and livestreamer Heather DeMian sounded the alarm about West. Tagging the police department, she tweeted screengrabs of his Facebook page, which included anti-Muslim memes, reshares of a video of a car ramming protesters, the crusader avatar and reposts from a Three Percenters page.

At the time, the Ethical Society of Police, an organization comprising primarily minority officers, tweeted that West had been reported and complaints had been referred to the city's personnel division but predicted "nothing much will happen." In 2019, it became clear that the types of posts that filled West's page were not exactly outliers. The Plain View Project's database included 43 current and retired officers and their posts. West, who apparently deleted or locked down his public Facebook page at some point after he was outed in 2017, was not among the officers listed.

However, when the Public Safety Committee of the Board of Aldermen held a hearing in response to the Plain View's troubling findings, DeMian was among the public speakers and described posts by West and other officers, urging city leaders to address the dangerous message they sent.

"This is more than just social media," DeMian told the committee. "It's a cultural problem."