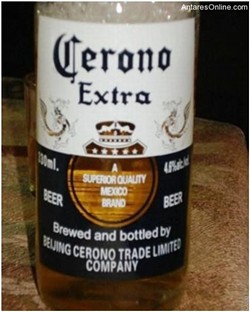 When it comes to fake stuff, Matt Hay sees the glass half full.
Updated 12:15 p.m. with response from American Traffic Solutions.

Last month (January 11 to be exact) Matthew Hay and a few compatriots launched a website opposed to the use of red-light cameras in Missouri.

A former council member from Arnold, Hay has been a longtime critic of the controversial cameras and did his best to ban the devices in his hometown during his time in office. His new website, wrongonred.com, continues to champion that cause ... and more.

The site is a virtual clearing house of anti-camera information, including links to legislation in Jefferson City aimed at banning the devices statewide, articles and data questioning whether the technology actually improves safety and advice on how other activists can get involved to help stop the cameras. "What does a skunk and a red-light cameras have in common?" the site asks. "They both stink."

Hay believes the site is starting to make a real impact. Proof of that, he says, is that someone recently launched a copycat site with the same name as his website. Only instead of a .com, the new site is a .org. Oh, and wrongonred.org also carries a very different message.

Click on the site, and it opens up as "Wrong About Red" and goes on to tout how red-light cameras actually save lives. The site also features three videos showing accidents and/or near collisions involving vehicles running red lights.

Registration information shows that the url for the site was purchased January 12 -- a day after Hay's website went live. Other than that, little else is publicly available on wrongonred.org.

The site is hosted by the Arizona website registry Domains By Proxy that allows its creators to hide behind anonymity. It's worth noting, perhaps, that Domains By Proxy is the same anonymous server that a group called Missouri Families for Safer Roads used to launch its website -- mosaferroads.com -- in 2009. Speculation back then was that Missouri Families for Safer Roads was funded by camera firm American Traffic Solutions (ATS), though both sides denied those claims.

For his part, Hay believes ATS is also behind wrongonred.org. Why? Because the three videos featured on the site all come from Missouri cities (Florissant, St. Louis and Excelsior Springs) that have contracts with ATS.

"That's proprietary video that could only come from ATS at some point," speculates Hay.

Reached for comment, ATS vice-president of communications, Charles Territo, tells Daily RFT that, yes, he is responsible for wrongonred.org.

"Absolutely," says Territo. "I put it together. We have nothing to hide."

"There's nothing fake about it at all. The purpose of the site is to do one thing: Correct the lies and inaccuracies told by opponents of intersection safety cameras," says Territo. "It's ironic that the the individuals who break the law cast themselves as victims when the real victims are those injured or killed by red-light runners."

Still, why use nearly the exact same url as wrongonred.com and why host the site anonymously?

"Just as the opponents of safety cameras are trying to make plays on words, so are we," says Territo. "Domains by Proxy is part of GoDaddy.com, which we used to create the site. The creators of wrongonred.com shouldn't take too much credit. Ours is a site that would have been made regardless to help inform people of the facts."

Hay, meanwhile, is taking the competing website in stride, viewing wrongonred.org as more of a compliment than a nemesis.

"You know what they say," quips Hay. "Imitation is the sincerest form of flattery."