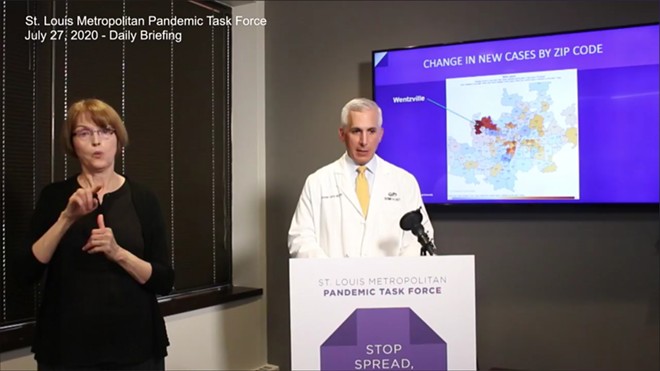 Staying out of Wentzville is officially good for your health.

Dr. Garza has the unenviable job of relaying the gravest in local virus news, including the number of St. Louisans on ventilators and in intensive care units. He speaks directly and plainly in brief video addresses on Facebook and at BJC.org, helping viewers understand the charts and see where the issues are around town.

In his video address yesterday, Dr. Garza showed an epidemiology curve chart and showed clearly where the line changes, and that “the right decision was made to implement masking.”

And when he broke down that curve by county was when things started getting real. He pointed out that the curves for all of the counties look high and that across the area “everybody is going up in cases.”

Dr. Garza explained that “transmission is occurring throughout the metropolitan area” and that “cases are spreading pretty much everywhere now” including in urban, suburban and rural areas.

But some zip codes stood out on Dr. Garza’s map of rising cases. According to his map, Wentzville was the worst hit, followed by O’Fallon, St. Peters, Kirkwood, Shrewsbury and Florissant.

The St. Louis Post-Dispatch reported this afternoon that “Missouri is averaging 1,437 new cases announced a day this week compared with 848 the week before and 437 at the beginning of July. Tuesday's count of 1,773 new cases topped the previous high on Friday of 1,652.”

Yeah, Missouri is coming close to doubling its COVID-19 cases each week, people. Mask up and avoid crowds if you can.

You can watch Dr. Garza’s entire address below.