In March, concerns about the incredibly smelly landfill in Bridgeton reached a new level when environmental groups warned of a possible "dirty bomb." The question was whether the Bridgeton Landfill's increasing stench -- tied to an underground fire -- could prove to be especially hazardous, given that there are radioactive wastes at the West Lake Landfill on the very same complex, which is located in north county.

And this month, the controversy at the two adjacent landfills was in the national spotlight when Rolling Stone published a feature titled "St. Louis Is Burning."

But yesterday -- days after environmental activists raised alarms about increasing temperatures around the Bridgeton Landfill -- the Environmental Protection Agency released a report shooting down some of the concerns about radiological wastes. The radiation at West Lake Landfill does not pose any health hazards, the EPA says.

"The site's radiological wastes are contained," Karl Brooks, EPA administrator for the midwest (region 7), says in a conference call yesterday announcing the findings of a recent survey, full document on view below. "The site does not emit radiation that poses a risk to health."

Brooks notes that the area where the wastes were dumped -- which happened back in the 1970s -- are closed off to the public.

via dnr.mo.gov
The site of Bridgeton and West Lake landfills.

"A person would essentially have to trespass, jump the fence...to risk being exposed to elevated levels of radiation," he says.

Despite these statements, environmentalists will likely continue to raise concerns about the larger-picture potential risks surrounding these two landfills.

While EPA oversees the West Lake Landfill, the state department of natural resources is responsible for oversight of the Bridgeton Landfill.

And questions remain about whether the subsurface fire at Bridgeton could reach the radioactive wastes at West Lake, advocates say.

Some government officials and representatives of Republic Services, the company that operates Bridgeton Landfill, have said it is misleading to refer to the situation as a "fire." They say it's a chemical reaction causing increased heat or a "subsurface smoldering event" as opposed to actual flames below ground. 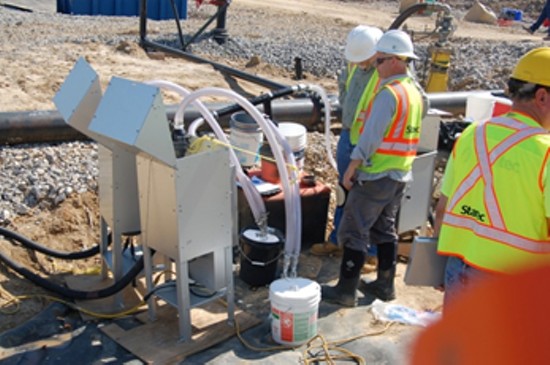 via dnr.mo.gov
Workers at Bridgeton Landfill.

Everyone agrees, however, that Bridgeton has smelled pretty bad for months now. This month, as part of an agreement brokered by Attorney General Chris Koster who sued Republic Services, Bridgeton Landfill is moving forward with a project that in the long term should decrease the odor by removing concrete pipes. Bridgeton will also put in a new "landfill cap" that will capture and destroy smelly gases, officials say.

But the Missouri Coalition for the Environment on Friday alleged that, based on temperature data, the fire is advancing toward the radioactive wastes (leftover from uranium for nuclear weapons).

"Republic Services is saying there is no problem, but they were saying that a long time ago, so it's really hard to believe them," Ed Smith, safe energy director with the Missouri Coalition for the Environment tells Daily RFT (in an interview prior to the release of the EPA report). "What we need to have...is assurances in the government that the two of these problems cannot become one."

He says, "What information do they have that makes them so sure the fire will not hit the radioactive waste?"

Continue for response from Republic Services and the full statements from relevant parties.