What Are We Supposed to Do About All Those MetroLink Freeloaders? 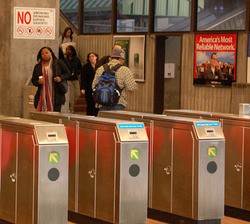 Tunrstiles work just fine at San Francisco's BART, but then, that's a heavy rail system
One argument wielded by Proposition A opponents of hiking the St. Louis County sales tax a half cent to restore and expand Metro transit services is that there's too many  freeloaders, people deliberately hopping aboard MetroLink trains without buying a ticket.

"There is definitely a vocal element out there who say, 'No one is paying and that's why you're broke,'" Metro's chief operating officer Ray Friem conceded yesterday in an interview with the Daily RFT. "It's an emotional issue for a lot of people."

Let's look at the facts:

Nationally, most public transportation experts agree, the fare evasion rate is 6 percent. In St. Louis, according to Metro, 4 percent of MetroLink riders are scofflaws.

In 2009, a total of 19.4 million people rode MetroLink, which means -- using the 4 percent figure -- some 776,000 passengers traveled free of charge. With an average boarding charge of 90 to 95 cents per rider (based on discounted fares for the elderly and kids), said Friem, this means Metro lost at least $700,000 in revenue.

All of which raises the question that has hounded Metro almost since the first line was built in 1993: Why not install a so-called "barrier" system with turnstiles and station attendants, like the ones you see in the subways of New York or San Francisco's BART?

Said Friem: "There is a place for turnstiles in this world, but we are wrestling with the question as to whether it is a good investment."

According to Friem, it would cost Metro an estimated $25 million to convert MetroLink's 37 stations to a barrier system. Further, a transit study by the Transport Politic, a respected industry publication, shows that it would take Metro 45 years to recoup that capital outlay, which Friem said sounded about right to him.

"So, as you can see, the answer is not simply a case of throwing up a few barriers," he noted.

The proof-of-payment, largely an honor system, is the current industry standard among all light-rail projects constructed over the past 20 years. That includes San Diego, Denver, Sacramento, Buffalo, Minneapolis, Portland, Phoenix, Dallas, Houston and Los Angeles.

The phrase "light rail" was coined in the early 1970s, and applies to an urban transit operation with a "light" passenger capacity, as opposed to the heavy rail systems in Chicago, Atlanta, Boston, San Francisco, Los Angeles or the London Underground -- the oldest rapid transit system in the world -- capable of handing extremely heavy volumes of traffic. (From the 468 subway stations in New York, an average of 5.2 million people are transported each day, for example, compared to the 62,000 daily riders in St. Louis or 70,000 in Denver.)

Friem said Metro, as well as light-rail agencies across the country, will be curious to see the results of a cost-benefit analysis presently underway of Los Angeles's light-rail system, where turnstiles have been installed at the entrance ways of 4 of its 62 stations. L.A.'s rail line, with 305,000 daily riders, loses roughly $5 million a year in tickets not purchased.

Friem added that Metro has taken steps to prevent freebies by ramping up the number of police patrols and the hiring last summer of 10 additional train-riding guards to check for tickets and issue $80 fines to those without one.

"We're continuing to explore other possibilities, too," concluded Friem. "I certainly don't want to lose $700,000 a year."