What Do St. Louis Kids Think About Race? A Photographer Finds Out 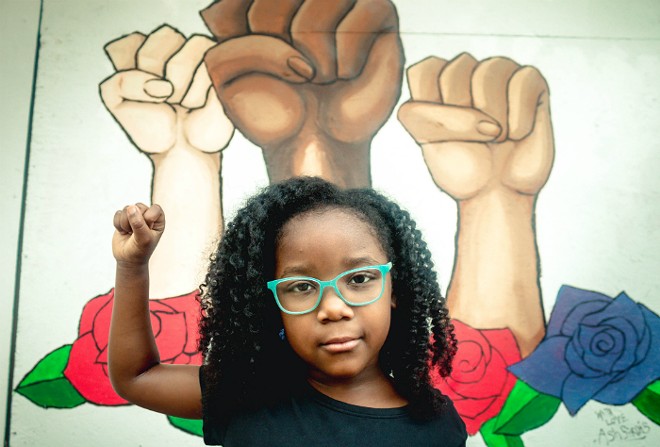 DANIELLE FAITH
Children answered questions about race and the world around them for a new photo project.


Photographer Danielle Faith set out on a mission to hear from St. Louis children, ages two to eleven, about their thoughts on racism and protesting.

A former educator, Faith wanted use art to help facilitate some of those tough discussions within families. So she put together a list of questions and gave them to parents to ask their kids. She later met them in the Grove for portraits among the street art and boarded-up businesses.

The project began a few weeks ago, when Faith started a Facebook group to reach out to parents of young children, asking if they would be interested in joining her first photo series. To her surprise, more than 60 parents volunteered to participate with their children. There was overwhelming interest from wide array of parents who support the Black Lives Matter Movement and wanted to help her out.


Her goal was to spark conversation between children and their parents about the current climate. The questions are worded for young minds but cover hard subjects.

Here are a few examples:

Why are people protesting? How does protesting make you feel?

A child, age eight, answered, "No, it's not fair. I just think it's dumb. Like, why are people racist? Just because I look different does not mean I'm bad. Do people think that?"

Have you seen any wrongdoings toward any one of your friends or family members from someone who doesn't look like them?

"No, it has happened, but not that I saw myself. My dad (he's Black) has told me stories and my uncles too, but I never saw it yet," an eight-year-old said.

Faith says, "Kids are extremely powerful and beautiful. They wowed me in so many ways."

As a former educator, Faith was interested in exploring how we shape our children. In a press release, she writes "Now is the time to have the conversations to ensure our children live with the intention of dismantling the cycle of racism and hate."

"We must teach them how to utilize their voice and have the tough conversations that POC have been having with their children for years," she writes. "It may not be easy, and it may be uncomfortable, but if we continue to just teach our children that everyone is created equal, all while celebrating our differences without acknowledging the injustices they are witnessing daily, we are a part of the problem."

The entire series with every question and answer is available on Danielle Faith's website. Check it out here.