What Happened to Thomas Fleming? Kirkwood Accountant Vanished Without a Trace 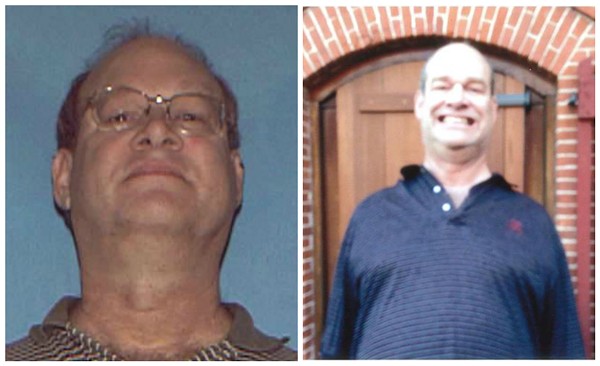 Image via Kirkwood Police
Thomas Fleming of Kirkwood has been missing since June 16, police say.
Exactly five months ago, police in Sauget discovered Thomas Fleming's abandoned car next to a coal plant near the eastern bank of the Mississippi River.

There was no sign of Fleming. The 57-year-old accountant from Kirkwood had gone missing twelve days before, on June 16, and he's still missing today. Police on both sides of the river say they don't know what happened to him.

Investigators stress they have found no suggestion of foul play. Still, there has always been something puzzling about the way he vanished.

"It's weird," says the missing man's neighbor, 88-year-old Norma Etheridge. "It bothers me."

Fleming and his wife lived above Etheridge in an apartment complex on Old Big Bend Road. A big man at six feet three inches tall and 270 pounds, he was a Notre Dame grad and liked to watch his alma mater play football on TV at Mike Duffy's Pub & Grill in Kirkwood. Staff there remembered him as a friendly, talkative patron who guzzled water by the pitcher — apparently as a way of combating his diabetes.

Etheridge considered him a good neighbor. She had a soft spot for him, because he was the same age as her son.

On the morning he disappeared, she saw him sitting in his car, parked outside. Fleming's wife was gone that day and didn't come home until evening, Etheridge says. St. Louis was in the midst of a heat wave, and Etheridge was working in the garage on some items to sell at a flea market. She estimates Fleming sat outside in his car for 30-40 minutes.

Etheridge remembers thinking it was too hot to sit in that car, but she left him alone. She eventually retreated to her apartment to catch the 11 a.m. showing of Judge Mathis on TV. She never saw Fleming again.

"If I had known anything was wrong, I would have knocked on the window and talked to him," she says.

Kirkwood police say Fleming was last seen about 11 a.m. as he drove away from his mother's house in Glendale. What happened next is still a mystery.

The state Board of Accountancy had been trying to reach Fleming on the day he disappeared. The board had previously audited him and found he had fallen behind on the training hours that accountants must complete every three years to keep their certification. It's not a major sin, but the board was calling him in front of the state's Administrative Hearing Commission to clear it up.

The state sent Fleming a notice that arrived on June 16. According to a delivery receipt, someone signed for it at 11:16 a.m. — shortly after Fleming reportedly drove away from his mother's home.

It's only about a ten- or twelve-minute drive between the Glendale home and Fleming's apartment, so he could have had time to return and sign for the package. But an attorney handling the state's case against Fleming would later find the signature questionable.

"This morning it was brought to my attention that Mr. Fleming has been reported missing," the board's attorney, Samantha Anne Green, wrote in an August 23 letter to the hearing commission. "Upon review of my file, it also appears that the green card certified mail receipt on file with the commission for service has a signature that differs from the signature for Mr. Fleming."

Green's skepticism about the mailing's signature was apparently news to Kirkwood police. When the Riverfront Times contacted the original detective on the case, more than ten weeks after Fleming had gone missing, the officer said it was the first he'd heard of it, but promised to pass the information on to the detective now handling the case.

We forwarded Green's letter along with a copy of the postal receipt obtained by the RFT. A mark, like a curvy X or possibly a strangely written T, is scrawled in the signature box. Kirkwood Detective Robert Bruhy, who took over Fleming's case, followed up shortly after.

Bruhy says the investigation had not turned up anything suspicious, and the packing slip and letter had not changed that.

"There is no way to verify Mr. Fleming's signature on the USPS receipt as a forgery without personally speaking to him," Bruhy wrote in an email. "At this time the USPS delivery receipt only suggests Mr. Fleming was home at 11:16 a.m. on June 16."

Later, on the phone, Bruhy says the case is still open, but investigators seem to have hit a dead end. No one had been using Fleming's credit cards, and they found nothing strange in his bank accounts. His abandoned car, a gray Nissan Versa with a Panda sticker in the back window, was maybe in a strange location, but it didn't seem to have been rifled through, as would be likely in a theft or attack.

In the original missing person bulletin distributed to reporters, police noted that wherever Fleming had gone, he hadn't taken his diabetes medication. He also had a history of depression.

The place where Fleming's car was found, the waterfront in Sauget, Illinois, features a string of shipping yards and treatment plants. Video footage from one of the industrial sites nearby captured something, maybe just a person's shadow, walking past, but you couldn't make out who it was, authorities say.

According to Kirkwood police, someone at a nearby facility recalled seeing the Nissan come and go in the days prior to Fleming's disappearance. On June 16, it arrived and never left.

Investigators wondered if Fleming had walked or fallen into the Mississippi. They sent a teletype out to agencies all the way to the Gulf of Mexico. Nothing has turned up.

Sauget Police Chief James Jones says he hadn't heard of any previous sightings, but at least one worker in the area had reported speaking with Fleming before the disappearance. It was blazing hot outside, and Fleming was wandering along the train tracks. The worker gave him a bottle of water and then headed back to his job.

"When he turned around," Jones says, "he was gone."