What's It Like to Bare It All For PETA? Let These Naked Activists Explain [VIDEO] 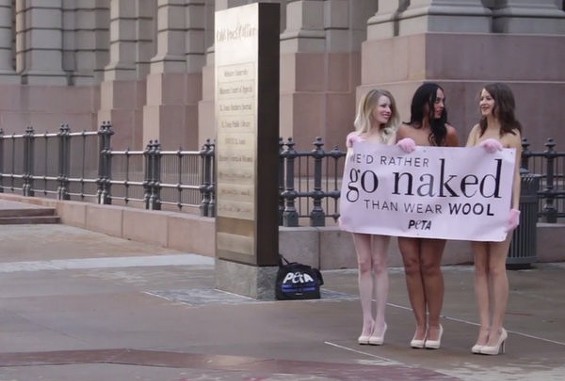 We all have causes we support. But few of us believe strongly enough in them that we'd parade around naked to raise awareness for the issue. With that in mind, Riverfront Times recently followed along with three PETA activists to better understand what it's like to bare it all in public.

"They're shocked to see us out there," Emily Lavender tells Riverfront Times videographer Stephanie Zimmerman while shivering alongside fellow volunteers Shena Hendrix and Georgia Argiris.

The women stopped through St. Louis last week as part of a national campaign against the wool industry, baring (almost) all to prove that they'd rather go naked than wear clothes made from wool.

"We just wanted to make people think of the other victims of fashion that people don't really think of, these gentle sheep who are violently abused and mutilated and sometimes killed for the wool industry," Lavender says.

Watch the full video (and the fantastic reaction from passersby) below:

PETA's 'I Would Rather Go Naked Campaign' Girls Strip Down in St. Louis from Voice Media Group on Vimeo.