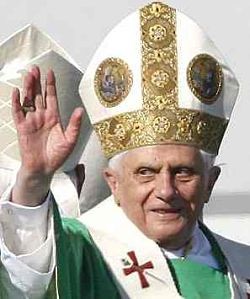 image via
Dolan is a protector of the old ways, including now-obsolete snack cakes.

5. Cardinal Timothy Dolan Dolan is St. Louis' very own Catholic boy made good: a graduate of the St. Louis Preparatory Seminary in Shrewsbury, he rose through the Church hierarchy to become Archbishop first of Milwaukee and then of New York. In 2012, Pope Benedict elevated him to the College of Cardinals, and some observers believe he's got a shot at becoming the first American Pope. (Granted, they're Americans and therefore slightly biased, but still.)

As Pope, Dolan would probably differ very little from his patron, Benedict, hewing to Church orthodoxy in all things (no abortion! more celibacy! no woman priests! etc). But, given his policy in Milwaukee, we suspect he'd be really good at clearing the Church of predatory child-molesting priests: He'd just pay them off and send them far, far away.

Dolan does have some local opposition to his becoming Pope: His brother Patrick Dolan told KMOX-TV, speaking as "a selfish little brother" that he secretly hopes Dolan won't be elected "because the family hardly sees Cardinal Dolan as it is and if he is elected pope someday, they'll probably only see him on Midnight Mass at home on TV."

4. Cardinal Raymond Burke The former Archbishop of St. Louis, Burke is now a VIP in the Vatican (technically a member of the Supreme Tribunal of the Apostolic Signatura, which makes him a very important canonical legal expert). But while he lived among us, Burke was very free with his opinions, vowing to deny the Eucharist to pro-choice Catholic politicians (including John Kerry and Joe Biden), resigning from the board of Cardinal Glennon Children's Hospital in protest of a benefit performance by pro-choice singer Sheryl Crow, calling for the "disciplining" of SLU basketball coach Rick Majerus after Majerus came out in support of stem-cell research and criticizing the University of Notre Dame for giving an honorary degree to pro-choice President Barack Obama.

While in St. Louis, Burke also made headlines for excommunicating Rev. Marek Bozek of St. Stanislaus Kostka Parish after the parish refused to hand over its assets to the archdiocese and was dogged by rumors of his role in covering up sex-abuse scandals in his previous role as Bishop of La Crosse, Wisconsin.

If Burke becomes Pope, prepare to watch the Church return to its glory days of the Middle Ages, with all the smiting, tithing, subjugation of women and free and gleeful excommunication this implies, though, on the bright side, perhaps this may also mean a flowering of ecclesiastical art (particularly Gothic cathedrals and stained glass), the return of Gregorian chant and maybe even a couple more crusades and a resurgence of Black Death!

image via
The current leaders of the Franciscan Sisters of Mary.

3. Rose Mary Dowling Dowling is the head of the Franciscan Sisters of Mercy, an order of nuns who arrived in St. Louis in 1872 with the mission of fighting for social justice and protecting the rights of women -- and the women themselves; the order has established several shelters in the city for homeless and battered females. This year, the sisters were named Best Geezer(s) by Riverfront Times for their work.

We're aware that Dowling's election to the papacy is something of a long shot. For one thing, there's never officially been a female pope, despite the enduring tale of Pope Joan, alias Pope John VIII, who allegedly reigned during the thirteenth century before she was exposed as female by giving birth during a processional.

Also, to become Pope, we assume you'd have to be popular with members of the College of Cardinals, who do the electing. Since the Vatican brass last year accused the Leadership Council of Women Religious, which represents the majority of American nuns, of "radical feminism," it's unlikely they would choose an American nun to lead them. Still, can you imagine the changes in the Church if a woman were in charge? Not just any woman, mind you, but a radical feminist? Liberal young people would have to come up with all sorts of new reasons for refusing to support the Church.

2. Rick Majerus Yes, we know, the former SLU basketball coach is with us no more. But what a Pope he would have made! Coaching is all about strategy and motivation and leadership -- which is the main job of the Pope. Plus, Majerus, with his fondness for Italian food, would have loved getting to work in Italy. See also: -Rick's Picks: Six of Coach Majerus' Favorite St. Louis Eateries

1. Zombie Stan Musial If this is the way we have to have him, rotting flesh and all, well, so be it. Rising from the dead is not exactly a concept unknown to the Catholic Church. Throughout his life, Musial was a devout Catholic, a regular attender of Mass and, to all appearances, a faithful follower of the Golden Rule. Plus, the man was adored, not just in St. Louis, but throughout the baseball-loving portions of the world. As Pope, we imagine he would be just and fair and a hell of a long-ball hitter. He may lack a few ecclesiastical qualifications, but just remember -- the man was was a Cardinal!