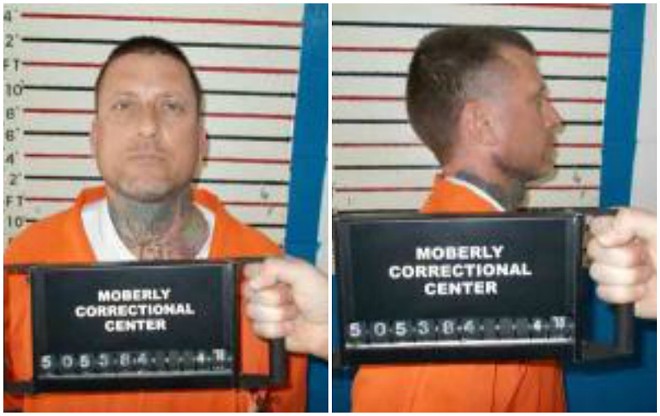 
A Villa Ridge man convicted in a vicious attack on a fellow member of a white supremacist gang wants to be released from jail, because he tested positive for COVID-19.

Thomas Wilson, a 44-year-old with "White" tattooed on one arm and "Pride" on the other, is being held in Lincoln County Jail while he awaits sentencing in a federal assault case. On April 15, his attorney filed and emergency request to have Wilson released to his girlfriend because he had contracted the coronavirus.

In a filing first reported by Robert Patrick of the St. Louis Post-Dispatch, federal prosecutors opposed letting him out, arguing that Wilson had not proven that he wasn't a flight risk or a danger to the community. A judge refused Wilson's request.

The government's filing didn't get too deep into Wilson's past, but he has a prolific criminal history stretching back at least 25 years. Convictions include various meth-related drug crimes, burglary and, in February 2014, an armed home invasion during which police Madison County, Illinois, say Wilson and three accomplices wore police vests and burst through the door of a drug house, demanding money and narcotics from the people inside.

In March 2014, St. Louis police identified Wilson as a suspect in an early morning carjacking. Wilson and an accomplice, both wearing "POLICE" t-shirts, were accused of yanking a man out of his Hummer H3, stealing $600 out of his pocket and threatening to kill him before taking off with his SUV, according to court records. It's not clear if he was charged in that case.

At some point during his various trips in and out of prison and jail cells, Wilson joined the Aryan Circle, a white supremacist prison gang formed by former members and rivals of the Aryan Brotherhood, according to federal prosecutors. In 2013, he and other local members of the gang — Daniel Jerome of Wentzville, Thomas Tisher of St. Louis County and Dustin Haney of Hermann — lured another man to George Winter Park in Jefferson County to hang out by a bonfire next to the Meramec River.

Wilson believed the man, a fellow gang member, had switched to another faction of the Aryan Circle, according to court records. For this apparent sin, Wilson "orchestrated the assault and 'patch burning'" — in this case, using a smoking-hot log to try melt the man's gang tattoos off of his skin. They also smashed him in the head with chunks of wood and rocks before holding him under water in the river. They finally left him unconscious on the river bank.

The man's girlfriend witnessed the attack and called 911.

"A short time later, [the victim] was taken by ambulance to St. Anthony's Medical Center," prosecutors recounted in court documents. "The emergency room doctor stated that [the man's] facial fractures were too numerous to count."

Wilson and the other three assailants were charged in 2018 with committing violent crimes in the aid of racketeering. He pleaded guilty in March, and he's due to be sentenced in June. In the meantime, he's being held in Lincoln County Jail.

In opposing his release, prosecutors wrote that he was isolated from other inmates after he tested positive for COVID-19 and has been receiving medical care. A doctor who examined him found that Wilson didn't have a "fever, cough or body aches or pains," so he'd be fine at the jail.