Who Is Daily RFT's "Ass Clown of the Year"? 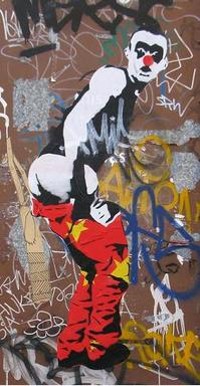 Over the course of the past 12 months, you -- the readers of Daily RFT -- have cast thousands of votes for your favorite "Ass Clowns of the Week".

Now comes an even greater decision. Ladies and gentlemen, who is Daily RFT's "Ass Clown of the Year"???

You know, the person whose idiocy and hubris makes them jack-ass maximus of 2009?

Continue on to see all the nominees and cast your vote!

(Note: Nominees appear in chronological order based on when their action made the news.)

1. Rep. Lacy Clay: The St. Louis congressman garnered 66 percent of the Ass Clown vote back in May when he filed for divorce without first informing his wife (she found out about it in the media) and then used his influence to get the court clerk to seal the divorce file from the public.

2. State Rep. Cynthia Davis: The politician from St. Charles garnered 67 percent of the vote back in June when she published a newsletter to constituents suggesting that there are hidden benefits to children going hungry. "Hunger can be a positive motivator," wrote Davis, who chairs the Missouri House Special Committee on Children and Families. "What is wrong with the idea of getting a job so you can get better meals? Tip: If you work at McDonald's, they will feed you for free during your breaks."

3. Joe Washinton: The former chief of the Northeast Ambulance and Fire Protection District was fired last month and is still under investigation for payments made to himself and the district's former attorney Elbert Walton Jr. In July, it was Washington's blatant violation of state Sunshine Law that won him Ass Clown of the Week honors.

4. Kenneth Gladney: The tea-bagger hero (and Ass Clown "zero") who was selling "Don't Tread on Me" flags for his employer (and attorney) David Brown back in August when he was allegedly beaten by unions thugs. Brown and Gladney seized upon the fracas to garner more attention than their fifteen-minutes of fame deserved and to sell more political swag.

5. Milton "Skip" Ohlsen: The "political operative" and Ass Clown whose Midas touch is stuck in reverse. Ohlsen is the man whose postcards attacking Russ Carnahan brought down State Sen. Jeff Smith and State Rep. Steve Brown. Ohlsen also kept a "shit list" of enemies on a posterboard in his apartment -- with one of those enemies believed to have been the target of a mysterious, unsolved bombing last year in Clayton.