Why Did a St. Louis Man Die in a Federal Prison Coronavirus Hotspot? 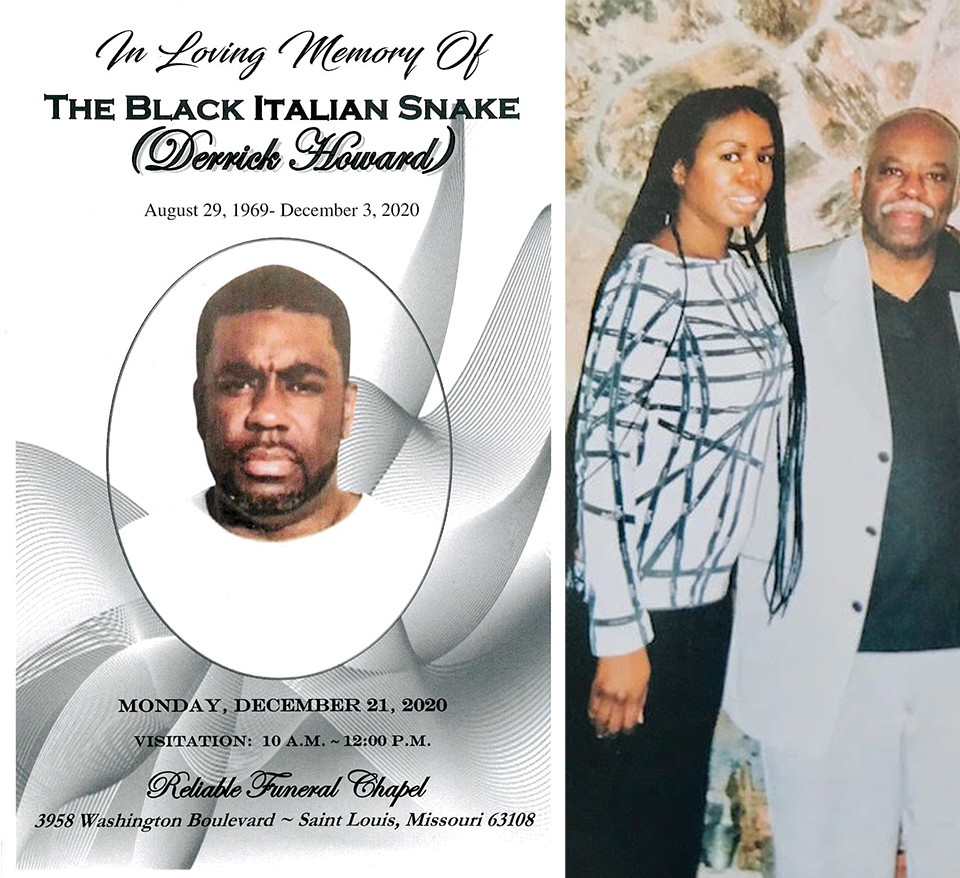 Vernado Howard, 81, sits in the living room of his O'Fallon, Missouri, home and ponders some photos spread out on the table before him.

The photos were taken a few years ago, the last time he saw Derrick Howard in person.

One photo shows Howard in the light yellow jumpsuit of the federal prison in Florida where he was being housed at the time. His left arm is draped across his father's shoulders.

Vernado Howard glances at the photo and nods, his eyes lighting up at the memory of that visit to the Coleman penitentiary in northern Florida.

But the elder Howard doesn't shy away from the many bad days that marked the decades before, as his son's attraction to the criminal lifestyle intensified.

Vernado Howard and his daughter Pam make no excuses for Derrick Howard's life. But they point out they loved him, and he loved them back, and that his life was worth something.

"He wasn't a bad person," Pam Howard says. "He did bad things. But he helped a lot of people in prison."

But Vernado Howard also acknowledges his son put the family through hell, and the memory hits hard.

There was that time, for example, when Derrick Howard, still in his late teens, had just returned to the family home in Normandy after serving time in a Missouri prison.

Picking up where he had left off, he began dealing crack cocaine out of the house, recalls his father, a retired auto worker.

Vernado Howard knew he had no choice. He obtained a court order to kick his son out of the house.

"He got angry with me," Vernado Howard says. "But I didn't care. I got other kids to take care of."

After more than 80 years on this earth, and helping raise eight children to adulthood, Vernado Howard has learned the great, hard truth that eventually dawns on all parents: You have only so much control over the adult your child becomes.

That cha-cha between nature and nurture, between DNA and environment — that confounding little dance never stops.

And with some kids you will have little say over the finished product no matter how hard you try — or how much you pray.

So it was with Derrick Demetrius Howard, the sixth in line of the family's eight kids.

"He was very bright, very smart," says Pam Howard, his older sister. "But I think that life of easy money, quick money, got him into trouble."

More than three months have elapsed since his son's death, and Vernado Howard says he is still plagued by questions about the circumstances surrounding it.

"We'd like to find out what happened in the last 48 hours," he says.

As for his son's death, the elder Howard has adopted a philosophy of stoic realism.

"I just deal with it, because I know stuff happens," he says. "Sometimes it's out of our control. But all I can do is try to tie up all the loose ends that I can."

At Pam Howard's request, the Tucson hospital where her brother died sent her a four-page report on the external autopsy performed on him a day after his death.

Derrick Howard's cause of death was due to COVID-19, with sarcoid — an inflammatory lung condition — and hypertension as contributing conditions, according to the report written by Dr. David Winston, a forensic pathologist.

But the pathologist's report was external only, and it makes no mention of the fall Derrick Howard suffered just before his death or what could've caused his heart to stop suddenly, such as a bad drug reaction, Pam Howard says.

"And I was like, that's very broad. And it doesn't say his heart stopped," she says. "Or if he had a heart attack. Nothing."

Howard also noted that Derrick Howard's body was not tested for COVID-19 after death to determine if the virus truly played a role.

"You didn't do an internal autopsy," she says. "And you didn't test the body for COVID. And yet you put COVID on the death certificate."

Winston tells the RFT that he knew of the fall that Derrick Howard suffered before his death but did not note it in his report because he did not believe it contributed to his death.

As for a postmortem testing of Howard for COVID-19, Winston says a test was not performed because of the notation in his medical records of a positive earlier test.

"So he had other lung disease as well," Winston says. "And so that puts him at higher risk, number one, for getting COVID, number two, for dying of COVID."

Ultimately, no internal autopsy was performed on Howard "because of his extended hospital stay and the documentation of his medical conditions by the records I reviewed," Winston says.

Pam Howard says she is still seeking answers about her brother's death.

"I'm not satisfied with that," she says. "I won't be satisfied until we get the last 24 hours of his medical records."