Why Did St. Louis County Go to Trial Against Gay Cop? 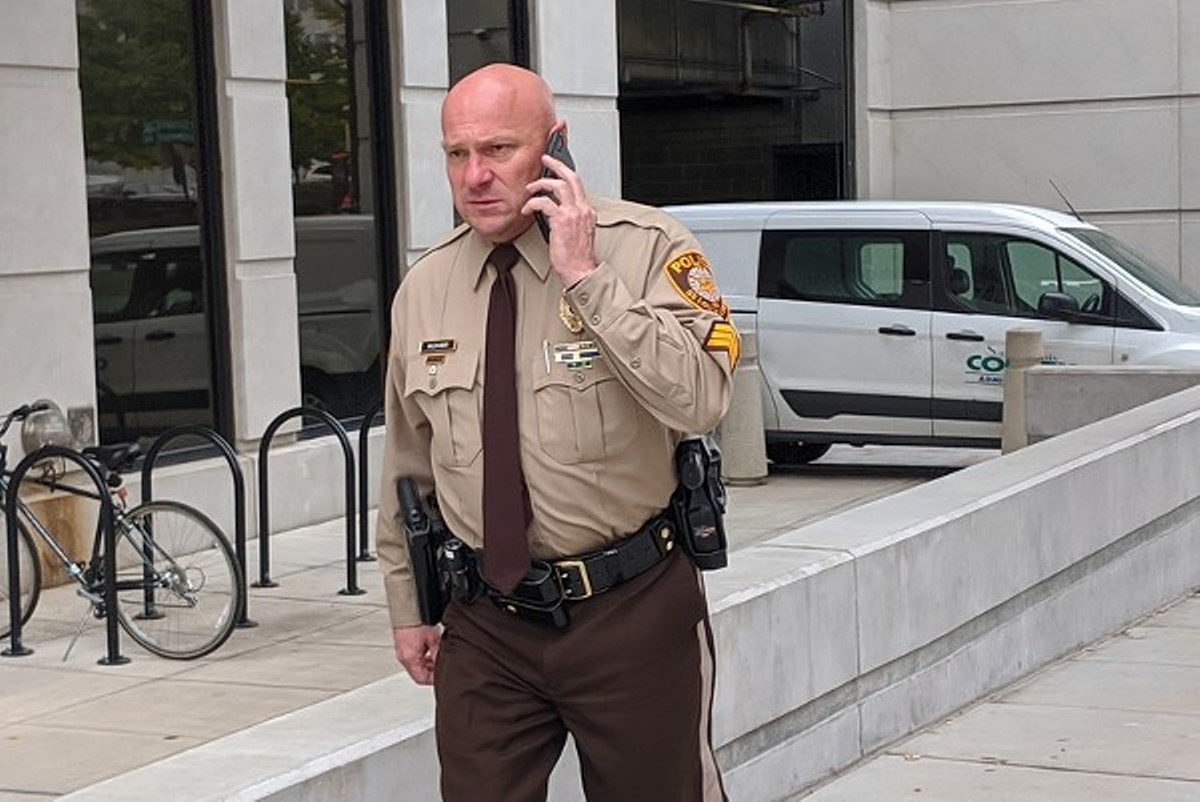 Sgt. Keith Wildhaber was treated horribly, and the county knew it before going to court. DANNY WICENTOWSKI

In 1998, a 26-year-old rookie St. Louis County police officer came upon a burning car with a person trapped inside at about 5 a.m. on a commuter parking lot in south county.

Unable to open the car doors, he resourcefully kicked in a window and, with the help of a good Samaritan, was barely able to pull the coughing and choking victim through the window and drag him 40 feet away just before the car was engulfed in flames.

It was a nice, feel-good story, albeit buried on page W4 of the St. Louis Post-Dispatch's West edition. The officer received a Medal of Valor for his heroism, described as "the highest award a community can give to those who protect it." Less than two years later, he would receive another award for performing the Heimlich maneuver on a woman who was choking.

The officer's name was Keith Wildhaber.

You may have heard of him now: Nearly two decades after those acts of glory, he is front-page news in St. Louis.

Wildhaber just received a $20 million jury verdict because the police department he served for all those years heartlessly discriminated against him for being gay. At least that's what the jurors believed after hearing that he had been passed over 23 times for a promotion because he displayed too much "gayness" and that he was retaliated against for filing his EEOC complaint and lawsuit.

The jury spared no feelings: "We wanted to send a message," its foreman told reporters. "If you discriminate, you are going to pay a big price. You can't defend the indefensible."

More staggering than those numbers was this enterprising reporting late last week from the Post-Dispatch:

"Wildhaber offered to settle his discrimination lawsuit for $850,000 plus a promotion to lieutenant six months before" the jury awarded the $20 million. "On Wednesday, County Counselor Beth Orwick said that the Board of Police Commissioners had refused to settle the case, but did not indicate the amount that had been discussed."

All together now: What were they thinking?

The public is entitled to make as harsh a judgment as the jury over the failure to settle with Wildhaber by the police board, the department, the county attorneys or anyone else in the process. Sure, that's easy to say with the benefit of hindsight, but the sad facts that emerged from the weeklong trial lead to one that is irrefutable: The county should have never let this disaster get into a courtroom.

I didn't attend the trial, so I don't know if Wildhaber's aforementioned acts of heroism were mentioned, but there was plenty of praise heaped on him by colleagues, past and present.

And it's pretty clear that jurors believed Wildhaber when he testified that, in 2014, a now-former county police board member, John Saracino, told him, "The command staff has a problem with your sexuality. If you ever want to see a white shirt (get promoted), you should tone down your gayness."

Jurors somehow believed an executive assistant who testified her high-ranking boss cited the Bible in calling homosexuality an "abomination," and they weren't impressed by the female sergeant who just happened to write "gay" next to the name of an officer on a candidate list. Then there was the testimony that Wildhaber had been given "geography lessons" by being transferred from Affton to the Jennings midnight shift — not quite the gold standard of assignments — after he raised his complaints.

But there were two inadvertent stars of the show, men whose conduct validates the notion that the police culture is really messed up when it comes to dealing with LGBTQ people, and for that matter, the truth. And in both cases, they again make one wonder what these people were thinking when they allowed this explosive case to get to trial.

The most tragically comical was one Capt. Guy Means, who indignantly denied calling Wildhaber "fruity" to Donna Woodland, the widow of slain police officer, at a 2015 police event. Why, said Means, he not only didn't remember the event, he wouldn't know that woman if she was sitting in the jury box in front of him.

Well, she wasn't. But he might have recognized her on the witness stand when — in a wondrous Perry Mason moment — she arrived packing photobooth evidence of Means not only having attended said party, but having given her playful, smiling bearhugs in the photos. She even brought the receipts. That scratching sound you could hear were the county attorneys trying to tunnel their way out of the courtroom.

But the same attorneys should have known not to have been in that courtroom based upon the black-and-white deposition given by none other than Chief Jon Belmar nearly a year earlier. As reported in the RFT, when Belmar was asked if Wildhaber's complaint would "have any impact of his efforts to get promoted to a lieutenant's position," the chief's stupendously, outrageously honest answer was this:

"I believe they have now."

Game, set, match. Here's my follow-up question: Hadn't some county lawyer prepped Belmar for the deposition? If not, why not? If so, wouldn't said lawyer have initiated settlement-offer discussions if it did not go well?

What were they thinking? The county put on this clown-car defense of lying witnesses and an honest admission that the chief was pissed enough at Wildhaber to deny him any chance of a promotion. And they wanted to take this to trial?

And if all that wasn't enough, after the trial Belmar apparently felt the need to put a little whipped cream on this plate of stewed cat food they'd served to the press and public. So just days after the trial, at a major event of police supporters emceed by KMOV's Steve Savard, Belmar had Post-Dispatch reporter Christine Byers (who covered the trial quite well) evicted from the premises.

Yes, this event emceed by one of St. Louis' most prominent media figures was closed to the press. Now that's a great sequel to losing a $20 million verdict.

There will be repercussions. Almost all of the five-member police board is going bye-bye. And there's really a case to be made — as Councilwoman Lisa Clancy has already stated — that Belmar, after presiding over this troubled culture of homophobia, and lying, might head for the exits, too.

But whoever leaves or stays, this much is clear: The county must settle out of court with Wildhaber, a good man who was horribly treated and deserves compensation, although hopefully for the county's sake, for a bit less than $20 million in damages (half of the $17 million in punitive damages would go to the state, by the way, thanks to "tort reform" laws). The price of poker will be a lot higher than $850,000 and a promotion. But the county needs to settle. Now.

Metaphorically, the county police department is a bit of a car fire right now, with Belmar coughing and choking at the wheel.

And I don't think Wildhaber will be coming to the rescue this time.