Why Don't We Hang at the Arch More? 5 Amazing Ideas to Get St. Louis to the Gateway

A particularly tech-savvy park ranger is behind a growing online conversation over attracting more people to the riverfront for events at the Gateway Arch.

"National Park Service wants you to come hang out at the park," posts law enforcement ranger Coty Stief on Reddit. "What kind of programs would you like to see us host to accomplish that?"

There's just one problem, says Ann Honious, spokesperson for the Jefferson National Expansion Memorial: Any events held at the Arch must connect to its federal mission of celebrating St. Louis' role in westward expansion.

"We have a great urban park, but because of our purpose and mission, we are restricted in some ways in how we use it," Honious tells the Daily RFT. "It is one of our primary concerns of the park, just getting people to understand what opportunities are here for visitors beyond just going to the top of the Arch."

The parks service already organizes several events on the Arch grounds each year. 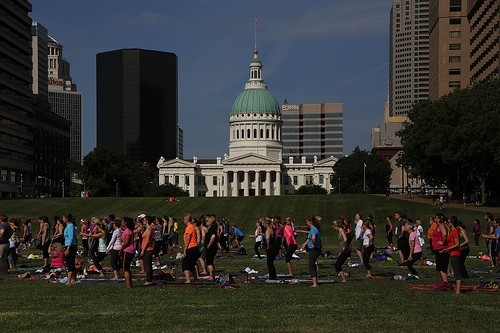 Last year's Gateway to the Stars astronomy program drew 700 stargazers. Yoga under the Arch -- which fits the park's mission of furthering health in families -- drew 1,730 people last summer. For three years, the park has held a Night at the Museum evening taking families on a living tour of St. Louis' history. Last year's event drew more than 600 people.

But those attendance numbers don't match the enthusiasm and excitement St. Louisans have for the iconic monument that's come to represent the pride they have in their city.

And that's where social media comes in.

The National Parks Service can't advertise or market it's events because it's a federal entity, so it relies on press releases, a mediocre Facebook page, online calendars and word of mouth to attract visitors. In a world where email marketing and hashtags rule all, that makes the park's marketing approach distinctly vintage.

"It's become increasingly clear that our main issue is notifying the public about events that are happening in and around the park," says ranger Stief, who serves on the Arch's social media team, on Reddit. "I'm just an employee that wants to get people involved with the park and wants to find out how to do that."

We couldn't agree more. To that end, here are five ideas for crazy-fun events with a tie back to the mission of honoring St. Louis' past and keeping families healthy.

Continue reading for five event ideas suggested by Reddit. Here are five ideas for events at the Gateway Arch that still tie back to the park's mission.

KDHX 88.1 FM plays more Americana and bluegrass music than (frankly) anyone really wants to hear, but that makes them a perfect partner for hosting outdoor concerts under the Arch. Choose a couple of local bands (May we suggest hometown heros Pokey LaFarge and The South City Three), and ask them to rehearse one song that harkens back to the days of westward expansion. It would fit in perfectly with their repertoire, and finding a partner in a local, independent radio station could mean unlimited free advertising. The best part? Alcohol is totally allowed in the park, as long as it's not in a glass bottle and is consumed in the grass, not in the visitor center or on the sidewalk.

Invite the food trucks, set up a screen and kick back as families around St. Louis cozy together to watch a movie. The Saint Louis Art Museum does it. The Missouri History Museum does it. So can the Arch. Inviting food trucks means an instant social media boost since followers have to use Twitter and Facebook to find out where their eateries-on-wheels are in this crazy city. Plus, it's easy to get around the requirement to stay close to the mission. Just choose a short, educational video about the Arch, westward expansion, the Dred Scott court case -- whatever -- and show it before the feature film. The park could even host a film competition with local students and screen the winning films at a big celebration in the park.

Let families pitch a tent under the Arch for a night. We're not sure if fires are allowed on grounds, but roasting marshmallows by a bonfire beneath those giant legs of steel sounds like an unforgettable experience. Partner with the St. Louis Astronomical Society again to bring out telescopes for stargazing. Sell glow sticks and other fun-in-the-dark toys. And keep the mission of the park alive by inviting living history docents to wander the campground telling stories about "their" good ol' days. We're imagining a scary (but still family-friendly) story time around a campfire (or flashlight circle, if fire's not allowed) told by people like David Riordan, the keeper of St. Louis' haunted history. 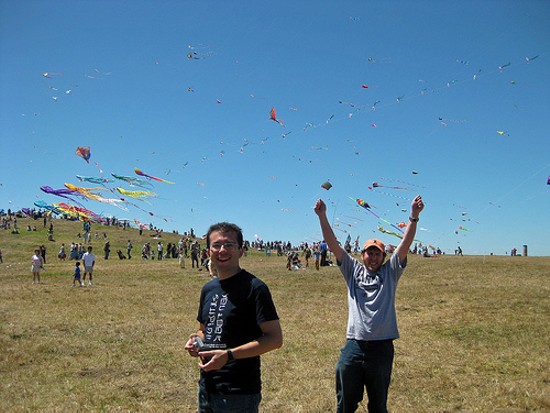 Visitors already take their kites to the Arch grounds on nice days, so why not make it official? Create a kite festival, and invite families around the region to spend the day flying. If the parks service needs to tie the festival to their mission, bring historians to describe how families built kites centuries ago and have old-timey kite-making supplies (paper, sticks, twine) on-hand at an arts and crafts table. There could be contests for steadiest kite, smallest kite, largest kite, most unusual kite, highest angle kite, and most authentic kite. Plus, those images would go viral; we can already see our Instagram feeds filling with photos of kites under the Arch.

OK, so this one's not from Reddit. This is our idea, and Daily RFT stole it from the Handlebar, which hosts Lunch Beat, a noontime dance party on Wednesdays. Invite suits from downtown, hipsters from south city, families from west county -- anyone! -- to dance under the Arch for an hour in the middle of the day. It's just as good a workout as yoga, and it just sounds like an amazing time. Plus, it fits with the park's mission to help families stay healthy.