Why is St. Louis Never Ranked as a Progressive City? Is It Because We're Too Black? 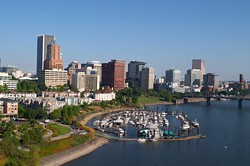 Portland: A place white people like.
Those are the questions essentially posed by urban affairs blogger Aaron Renn in his latest posting, titled "The White City."
Renn takes a look at the mid-sized cities of Portland, Austin, Seattle, Denver and Minneapolis that are routinely hailed as being hip, progressive towns. He then holds those five places up to U.S. Census Bureau statistics, and finds that in each case the city (and its core county) falls below the national average for African-American residents.
Take a look:
click to enlarge

Moreover, Renn wonders whether the folks leaving Rust Belt cities (ie. more heavily populated African-American places) for the likes of Portland and Denver are really as progressive as they claim. Or, are they just participating in what he calls "White Flight writ large"?

"Why move to the suburbs of your stodgy Midwest city to escape African Americans and get criticized for it when you can move to Portland and actually be praised as progressive, urban and hip?" he writes.

"Many of the policies of Portland are not that dissimilar from those of upscale suburbs in their effects. Urban growth boundaries and other mechanisms raise land prices and render housing less affordable exactly the same as large lot zoning and building codes that mandate brick and other expensive materials do. They both contribute to reducing housing affordability for historically disadvantaged communities. Just like the most exclusive suburbs."

Read Renn's entire argument here.
And a tip of the hat to St. Louis urbanist/blogger Michael Allen who brought Renn's findings to our attention today via a tweet.