Why It's OK, and So Not OK, for ESPN to Report on Michael Sam Taking Showers 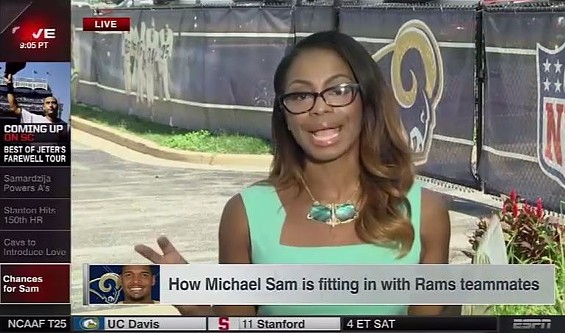 Michael Sam showers. He is also gay. In the world of professional football, this is news.

At least, it's not news until some Rams defensive player anonymously admits to ESPN that he keeps tabs on his gay teammate's nudity and says that Sam delays his showers so none of his teammates think he's trying to have sex with them.

"Another Rams defensive player told me that, quote, 'Sam is respecting our space,' and that from his perspective, he seems to think Michael Sam is kind of waiting to take a shower as not to make his teammates feel uncomfortable," ESPN reporter Josina Anderson answers when asked about how Sam is fitting in on the team (and not how Sam is fitting in in the showers).

But ESPN is nothing if not thorough, and one anonymous source is not enough, even when answering a question nobody is asking. So Anderson interviewed two other Rams who weren't afraid to go on record about Sam delaying his shower in deference to his lady-loving teammates. Their answers are priceless.

"[Kendall] Langford and linebacker Alec Ogletree told me that they did not know that specifically, and also weren't tracking that," Anderson says.

Professional athletes aren't tracking when one of their teammates showers, ESPN? Shucks, better luck next time.

But here's the truth: As America enters a new era of its LGBT civil-rights movement -- one where gays are accepted by many, tolerated by most and hated by a few -- sports journalists are the watchdogs for prejudice, discrimination and harassment against gays in sports. And when it comes to football, that only means Sam (so far.)

As the preeminent sports-news source, ESPN knows it has a responsibility to uncover unfair treatment aimed at Sam solely based on his sexuality. In fact, ESPN knows this so well that ESPN the Magazine published an in-depth report on the homosociality of NFL showers nearly two months ago.

In his story "Nothing to See Here (A History of Showers in Sports)," David Fleming says the Rams shower room is not a hostile place for Sam. It could have been, as a string of players and coaches -- sometimes anonymous, sometimes not -- have told the media.

"Imagine if he's the guy next to me and, you know, I get dressed, naked, taking a shower, the whole nine," then-Saints linebacker Jonathan Vilma told ESPN the Magazine in February. "And it just so happens he looks at me. How am I supposed to respond?"

Rams players are proving that the answer to Vilma's question is simple: Wash off, dry off and get back to work.

"Look, guys shower together," says Rams linebacker Jo-Lonn Dunbar tells ESPN the Magazine. "And Sam's been showering with guys forever. We haven't had any issues, and he's been here a month, and I'm pretty sure he's washed his tail in the last month. I don't know what people think or what their perception is of a team shower, but it's really not that cool. You just kind of get in there and get clean and just drop drawers."

So yes, there's room in this 24-hour news cycle for a conversation about how NFL locker rooms, long a bastion of hypermasculinity defined by homophobia, treat a gay player. After all, it's not the first time a black athlete has had to break the "shower barrier"; Jackie Robinson felt like an outsider until a fellow Brooklyn Dodger convinced him to start showering with the team, according to ESPN the Magazine.

But a thoughtful examination into sports showers as an emblem of hegemony is not the same thing as speculation about when Sam strips down to wash off. And someone needs to tell ESPN's Josina Anderson.

"If everybody hasn't moved on from this already, they should now," Dunbar tells ESPN the Magazine.

Everyone but you is over it.

ESPN regrets the manner in which we presented our report. Clearly on Tuesday we collectively failed to meet the standards we have set in reporting on LGBT-related topics in sports.