Why Not Require Prescriptions for Psuedoephedrine? 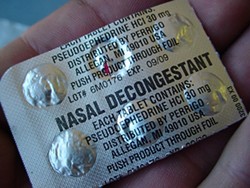 Today's Post-Dispatch has an interesting article about psuedoephedrine -- one of the key ingredients for the making of meth.

Yesterday, officials in Union joined another Franklin County city -- Washington -- to become the second municipality in the nation to require a prescription for the sale of cold medicines (such as Sudafed) that contain psuedoephedrine. The law goes into effect immediately.

Jefferson County -- the Meth Capital of the Nation -- may follow Union and Washington's lead as early as next month.

In Oregon, a similar ban has caused meth manufacturing to plummet. The state used to bust about 400 meth labs a year. Now it busts around 20.

Missouri Attorney General Chris Koster is now attempting to get prosecutors and sheriffs across the state to endorse a state-wide law requiring prescriptions for pseudophedrine. Most all those law enforcers have signed up.

So why not a state-wide law?

Never mind the fact that 40 percent of all psuedoephedrine sold in Missouri is used to make meth, according to the Attorney General's Office.

Seems that inconveniencing the consumer is a small price to pay if it also inconveniences the meth maker. Oregon is living proof that such a law works.