Why the Cardinals Should be Thinking About 2009

Well, friends, it appears that we've finally reached the end of the road.

This year's version of the St. Louis Cardinals has given us an outstanding ride, but no longer. It would take a true miracle for them to somehow come back now and make a real run at the Brewers. Unfortunately, I think the Cards are fresh out of miracles.

As September unfolds, I look around at this team's walking wounded, and I can't help but hope that the Cardinals just shut some of these guys down, rather than continuing to trot them out at half strength for the final month of the season. 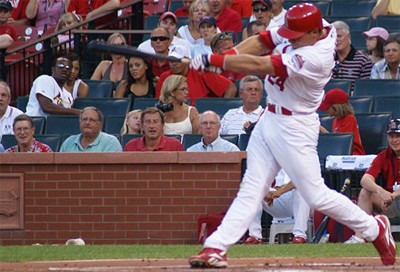 http://commons.wikimedia.org/
Chris Carpenter
Rick Ankiel
We saw what happened with Rick Ankiel. He got hurt, the team refused to put him on the disabled list, and he really hasn't been the same since. We've seen some signs of life lately, but the fact remains that Ankiel has been occupying a roster spot for over a month while being at far less than 100 percent. The team has even played him mostly in left field, trying to help guard him against possibly further injuries due to the amount of running necessary in center. That is a flat-out terrible use of resources.
http://commons.wikimedia.org/

It is encouraging, to me at least, to see Chris Carpenter apparently being brought back in the bullpen this time. It was certainly worth the risk to put him straight into the rotation when he came back initially. If Carpenter had been able to go out and dominate, the Cards' chances of making that big run would have been greatly increased. As it turned out, Carpenter probably wasn't quite ready to step right into a starting spot in a playoff race. Now, we'll get to see him get some work down the stretch in measured doses. Hopefully, he'll be able to throw some healthy innings and prepare to take back his rightful place as the ace of the pitching staff for 2009.

The Cards now have plenty of reinforcements, due to the expanding rosters. They've called up Kelvin Jimenez, Jason Motte and Josh Kinney, all of whom will pitch out of the bullpen. With that kind of insurance, I would hope the Redbirds would be a little bit careful with a relief pitcher like Kyle McClellan.

McClellan has thrown an awful lot this year, particularly when you consider that he only came back from Tommy John surgery last year. It looks, to me at least, as if K-Mac has been wearing down lately, and I think it would help him to get some extra time off through the last month of the season.

McClellan has proven himself capable of doing an admirable job as a setup man when he's right; manager Tony La Russa would do well not to run the kid into the ground in an attempt to capture a couple of extra victories.

Joe Mather
Joe Mather
The same goes for players like Joe Mather, who hurt his wrist Monday. If Mather needs to be shut down for the year, I hope they do it. We've seen what Mather can do; his potential is outstanding. Wrist injuries can linger if not allowed to heal properly, sapping a player's power far down the road. Let's hope the Cards avoid that risk with Mather, lest he go from Joey Bombs to Joey Duds. The same goes for a player like Adam Wainwright if even a hint of his finger issues seem to be lingering. Even Troy Glaus, who's been healthy all year long, could probably use a few extra days off the rest of the way. And do I need mention Albert? I didn't think so.

It's been an outstanding year for the Cards, even if it may not end quite the way we all would like it too. What's most important now is not to hurt the team going forward. If that means shutting a couple of players down in order to ensure their health in April of '09, then that's what needs to be done.