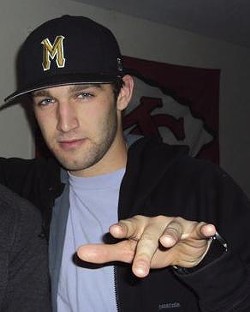 facebook.com
Will Nixon: His father has his back.
A son of Missouri Governor Jay Nixon was cited for possession of marijuana early Saturday morning in Columbia.

The CBS affiliate for mid-Missouri, KRCG, broke the story yesterday. According to the television station, 21-year-old Willson (aka "Will") Nixon was at the Brookside Apartments on South 10th Street when police responded to complaints of a loud party around 1:23 a.m. September 10.

When arriving at the scene, the officers noted an "overwhelming smell of marijuana in the hallway." Through an open door, the officers say they saw Nixon seated at a table with marijuana. When Nixon saw the officers, he attempted to conceal the drug, and the police stepped into the apartment and made an arrest under the "plain view doctrine" that allows law authority to enter a residence when a visible crime is taking place.

Nixon was cited for possession of less than 35 grams of marijuana, which in Columbia is a municipal violation that could result in community service and a fine. Nixon reportedly did not tell officers of his relationship to the governor, though one of his friends on the scene did.

Yesterday the governor released a statement saying: "This is a private matter that will be handled through the municipal process. My son is a fine young man, and we will be working through this issue as a family."