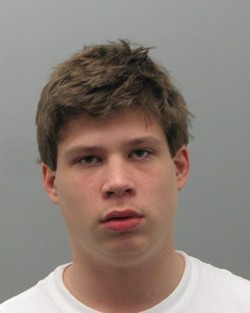 William Mack Sapp, 19, of south St. Louis County, was charged yesterday with second-degree assault and felony leaving the scene of an accident. St. Louis prosecutors say that Sapp was the driver of a gray Mitsubishi Eclipse that struck the flag girl during the beginning of the drag race.

The girl, who's since been identified as 17-year-old Sammie Boldwyn of Hazelwood, then fell under the truck of the the other person racing Sapp and was run over. She remains in critical condition at an area hospital.

The driver of a black Chevrolet truck that ran her over, 19-year-old Trenton Pinckard, turned himself into police earlier this week and was charged with leaving the scene of an accident. He's since been released from custody after posting 10 percent of his $50,000 bond. Sapp, meanwhile, is being held on a $500,000 cash-only bond.